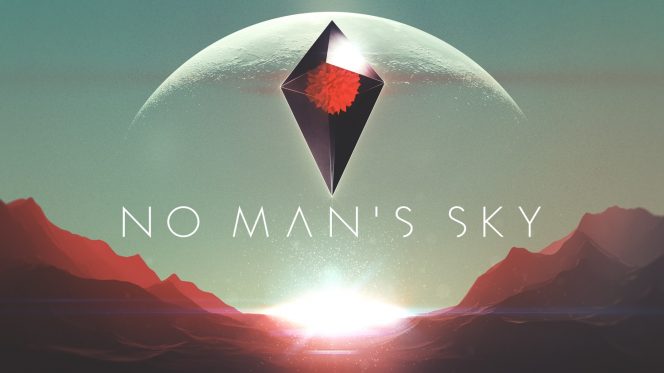 When an ambitious project like No Man’s Sky comes around, no one can stay indifferent. Some people immediately start biting their fingernails with anticipation to try such a game, whole others just shake their head and immediately prophesize its doom. But both groups actually share one hope – a true desire for a game so grandiose, that only an open universe filled with countless planets would suffice. Sigh… There was no way of diving into this game before one deep breath filled with hopes and fears.

As it’s a procedurally generated world, oops, universe, the start will be a unique experience for every player. Your character wakes up beside a broken space ship which he has to repair so he can leave the planet and resume exploring. In those first few steps you’ll realize that this is a survival game. Something that is somewhat laudable is that the game doesn’t underestimate you, but instead grabs you with its openness and insists that you figure out the mechanics on your own. No matter what planet you found yourself on, you’ll notice that your suit’s survival systems are slowly draining, and it’s up to you to figure out how to maintain them. And after fixing your spacecraft the excitement effect reaches crescendo – exploration! The strongest foundation for every exciting adventure. 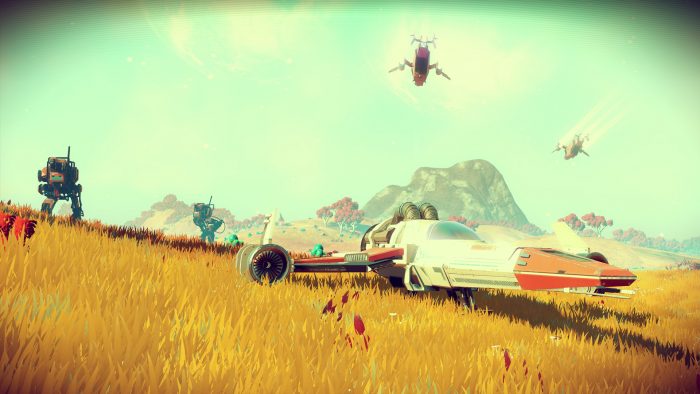 Taking into account that the game’s universe is independently and randomly generating as you explore it, everyone will try to explore as many worlds as possible in hopes of discovering the plethora of variations offered. But that’s where you’ll run into your first problem. Moving between planets, or even worse – star systems, depends on resources that you’ll not only have to take the time to collect, but will also have trouble stockpiling. The inventory system is so limited, slow and cumbersome, that you’re certainly going to try and bite off the cord of your wireless controller in frustration. And even when you collect the resources, you’ll spend them so quickly that you’ll just get frustrated again. And as there’s a whole open universe before you, you’ll feel like your flying speed is closer to reverse than even zero. There’s the silver lining of a hidden promise – the promise of journeying to the center of the universe, imposed as the only sensible story thread to follow in this game. It’s like some hidden promise, beckoning you to come and find it. So if you’re a patient player, there’s no doubt that you’ll circumvent this gaping chasm, just Little Foot searching for the “Great Valley”. 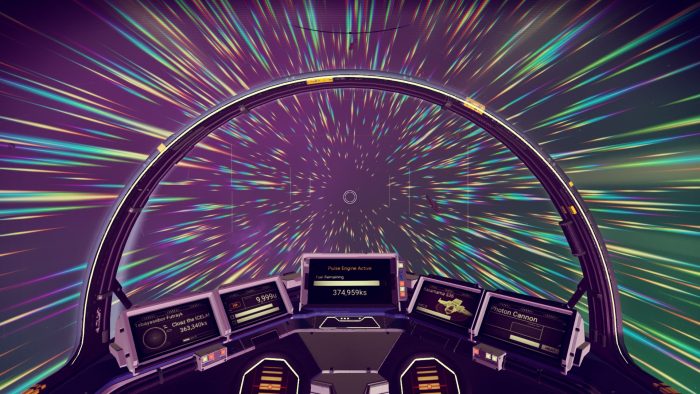 Speaking of dinosaurs, the variety of flora and fauna over the planets in No Man’s Sky is huge! If you love algorithmically generated animals comprised of random parts and colors. Truly, the longer I explored, the more I’ve noticed how little these variations do to retain your attention. There’s a desert planet, cold planet, noxious planet, some-other-type of planet, but other than looking different and a different color palette, there’s nothing truly distinguishing them other than their emptiness. It’s at that point where the desire to keep on playing falls rapidly, because beside upgrading the gear and your spaceship, the main draw of the fame – exploration of huge, beautiful, unique worlds, sadly disappoints. 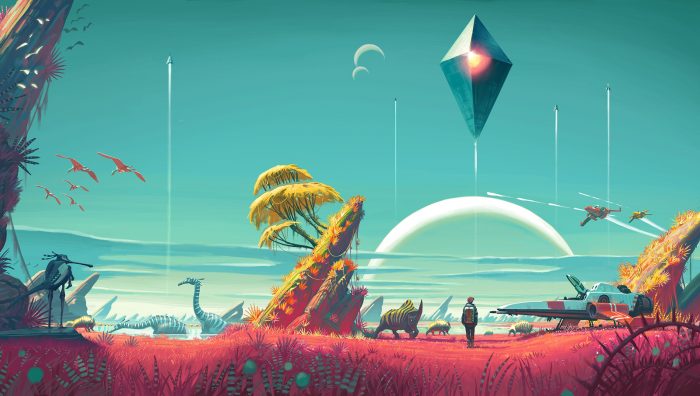 This marked the second time that I found myself bored while playing, something that is inexcusable for a game that promised vast freedom in exciting exploration. This second big obstacle can only be circumvented by player’s focus and perseverance to upgrade his equipment with the ultimate goal of reaching the center of the universe. Along the way, you’ll meet intelligent life forms who you can communicate with only by learning words of their language, by finding them around the universe. Space stations, places for multitudes of life forms to gather, are another disappointing feature. They all look practically the same, offer only one NPC serving as a trader, and have a busy “airport” where various aliens come with their spaceships and who you can engage in trade over resources or even buy their spacecraft from them. In case that these things held your attention long enough not to quit but continue on faster and more efficiently, chances are high that you’ve reached the third big disappointment of this open adventure. After you’ve come to terms with the shortcomings of the inventory system, upgraded it a little, found out what’s what, and where to find something and where, you’ll take a moment and look behind you. This is the moment when the player looks back on his accomplishments. I’m not gonna lie, you’ll reach this moment after over twenty hours of play time, but it’s at that very moment when the world of No Man’s Sky opens in a way you’ve expected from the beginning. You’ll feel free, experienced… You’ll feel like a real space veteran. You won’t be bothered by periodical shootouts with space pirates, or unimaginative shooting at boring creatures and drones wandering across the planets… Nothing will matter other than the fact that now you are a mustachioed space Solid Snake who recently started contemplating the meaning of life. And the story will intrigue you more now, so even the battles will seem more fun when you get to use your upgraded weapons against giant robots. 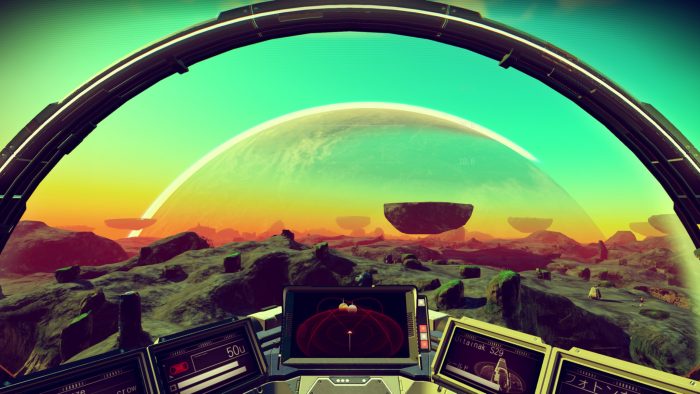 Remember that “sigh” from the beginning? Well, the first sigh comes after someone asks you to comment on the quality of this game. Uh… That’s a tearing issue for every objective critic. No Man’s Sky was a promise that was better to dream about than it is to play, a game that was more fun to resume than to begin, a piece of work that disappoints and pleasantly surprises at the same time, a chaos of emptiness and undefined quality that you’ll find at the most unexpected places. To quote the Genie from Aladdin: “Phenomenal cosmic powers! Itty bitty living space!”. No Man’s Sky is a foundation for an opportunity that no game has come close to, but is so empty despite its size. This is a game riddled with technical difficulties, bland visuals, but beckons you to its side with its openness and eluding promises. Eluding, but eventually reachable. This is one uncontrollable, repetitive, magical chaos that will through its simple and vague solutions make you ask – what sort of meaning resides in the void? A chaos just like this text that probably won’t be able to tell you if the game is necessarily good or bad, but should certainly hint that you can expect less than you hoped for, yet get more than you thought at first. Sigh…