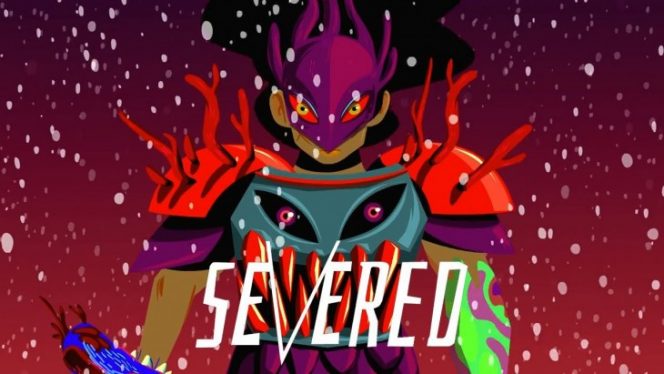 My Vita’s been waiting hidden in a drawer for about a year now. Vita had little exclusives, from its very start, over Persona 4, and today – nothing. I’ve tasted my Metal-Gears, Killzones and Uncharteds and I was waiting for a good exclusive to blow my mind. I believed in it and I nurtured hope that one day I’ll play a game on Vita that I’ll remember for the rest of my life, and that it won’t as “I regret buying this system”. That day has come. 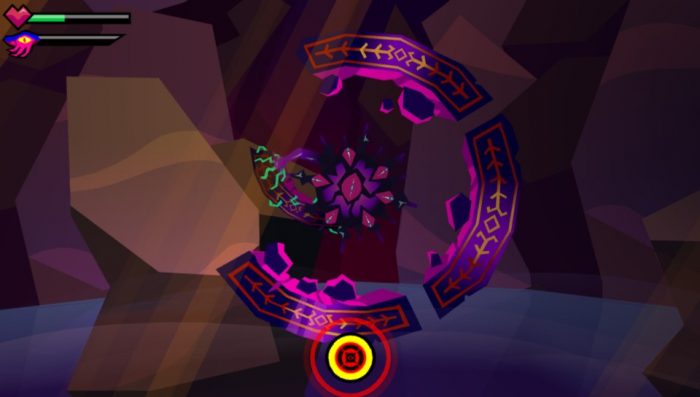 Imagine a thriller dungeon crawler with Fruit Ninja combat, twisted themes and cartoony graphics. If you’ve managed to imagine that, you’ll get Severed. This game comes from DrinkBox Studio who are responsible for the phenomenal Guacamelee!, and you can see the influence of the older brother. Guacamalee! had a Luchador theme, and Severed is using the theme of Spanish Day of the Dead (El Dia de los Muertos) in an atypical way, because you have a feeling that you’re in Spanish Hell, but you can’t seem to see recognizable things, such as skeletons, anywhere. 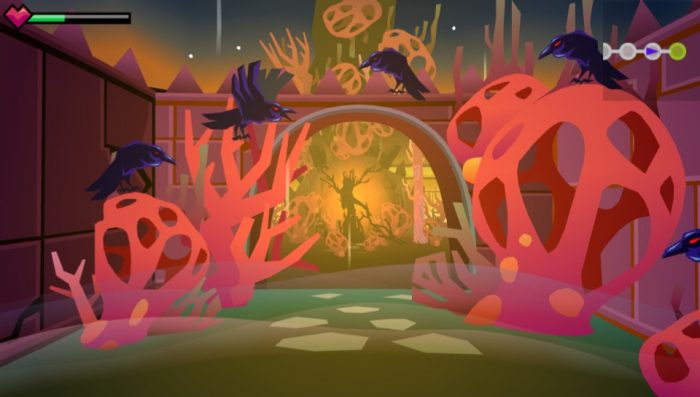 The story follows Sasha, a girl who has mysteriously lost her arm, and is returning to her house only to find that everything’s destroyed and her parents and brother are missing. Soon after, a grotesque mysterious figure appears before Sasha, gives her a sword and tells her to go find her parents and brother. The rest of the story is being explained through comments from a mysterious two-headed bird (?), and a variety of hidden images and messages that you’ll find along the way. The story and its resolution are very cryptic and morbid so I won’t go into detail, because the game is worth a try and experiencing it firsthand. All I can say is that your spine will crawl many times. 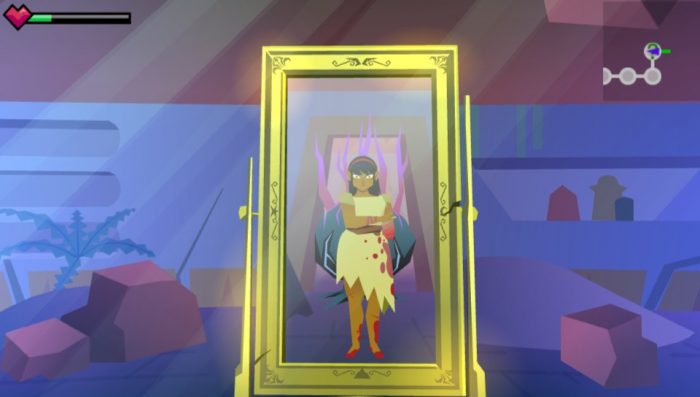 Navigation through the game is node –based, which means that you move from room to room in one move. In rooms you don’t do much except fight. Next to hidden handles, breakable vases, and hidden doors, you won’t have much interaction with it, which is a shame. The thing that’s making these rooms fun is the design. You can see that they had a lot of influence from Guacamelee!. Colorful corridors of dungeons and fortresses won’t become unbearable at any moment. Even if it starts feeling monotonous, the game will move to another theme as if it knows exactly when the player needs a change of landscape and environments. Never have I felt that developers are following my gameplay and that they know when it will get boring so they can replace the scenery, until now. 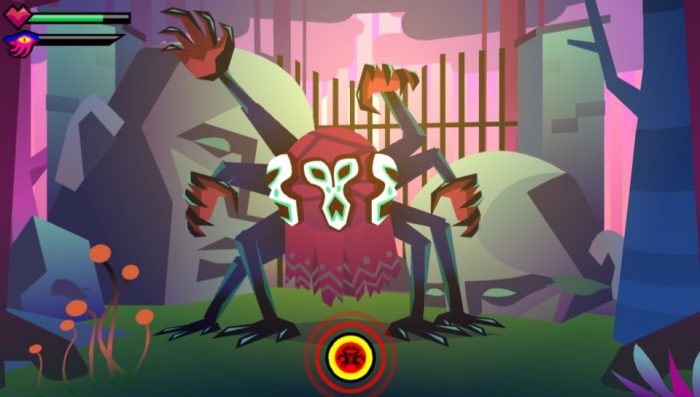 Combat is 90% of the gameplay. If you know how to play Fruit Ninja, you will manage in Severed. You will know at all times when you’ll be attacked by the enemies, because there will be a small fire burning outside of their room warning you that there will be trouble. They did this because of the interesting system of advancing Sasha, of whom I’ll talk a bit later. Each enemy is uniquely designed and some of them are so original that I thought several times that there is something wrong with these designers when they managed to draw such grotesque creatures. Every creature has a weak point that you “cut” with short or long swipes across the screen. The game very precisely understands if you want shorter move that deals less damage, or a longer for more. While you’re beating your opponents, your focus meter is charging, and if you miss the weak spot or get hit, you will lose focus. When you fill up the focus and beat the opponent, you get a mini game where you can cut limbs and other organs of that monster. Yes, limbs and organs. Each opponent has a meter that is filled around their portrait that tells you when it will attack you. Then you have the option to defend against the attack with your sword if you’re precise and fast enough. In the beginning you will not have much hassle with combat, but later on, the game will try to make it quite difficult, and you’ll have to concentrate more and try much harder to complete some rooms. 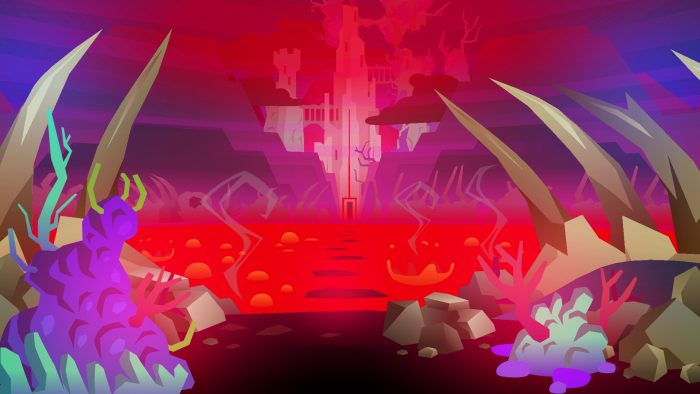 Those organs and limbs play a big role in the game. Each limb or organ serves to improve Sasha in some way. You can improve her in a variety of ways – such as increasing the damage that you do, increased damage in full focus, stronger defense etc. Small body parts (giblets – gibs) can drop from enemies or vases, which you can “transform” into any other organ or limb that you are missing for an upgrade. Morbid, but fun. 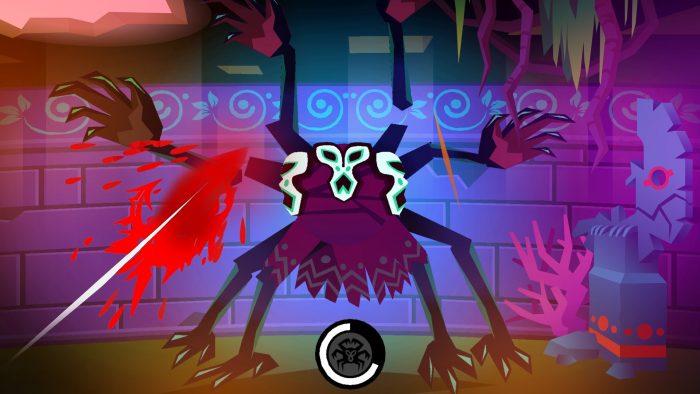 Apart from the sword, you have three spells, but I will mention only the first two, third will remain a surprise. First spell is used to briefly stop the time, which is very useful if you get attacked by multiple enemies, but in this case they’re dealt less damage from your sword. Second spell allows you to “devour” buffs that enemies have and you can use them for yourself. Both spells can be used during the levels to reveal hidden rooms, but also to solve mysteries and puzzles you encounter. I recommend that you meticulously search every room, because you never know where you can find an upgrade for mana or life. 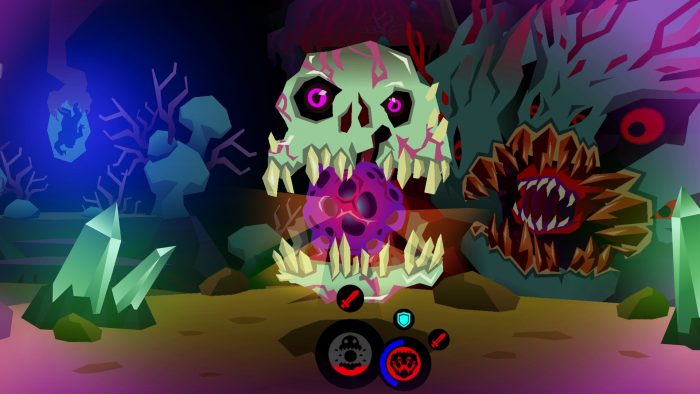 Severed is not a game without flaws, but they are so insignificant and cannot undermine the great feeling and even the tension and fear while playing this game. Obstacles are simple and secret rooms can easily be discovered and I just wish it had other challenges beside fights. DrinkBox managed to lift simple concepts to a highest level and show that even, unfortunately forgotten, Vita may have its place under the sun of new generation consoles. If somebody wants to take his Vita for ”a walk”, I absolutely recommend Severed.