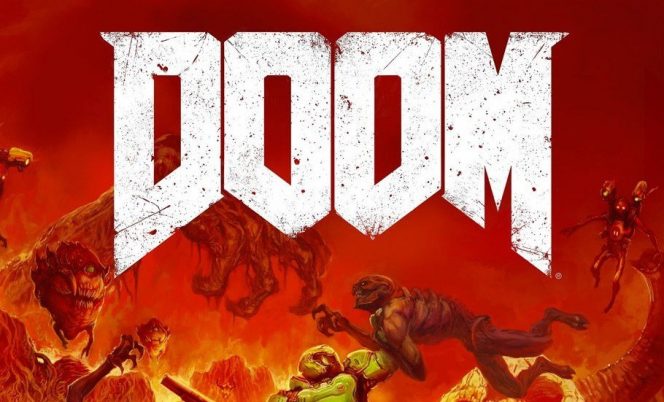 Long ago the FPS genre used to be the personification of a simple and elegant design – here’s the gun, there are the bogeymen, from there you’re on your own. And it worked perfectly for many years after Karmak and friends gave the gift of DOOM to the world (has it already been 23 years!?). The genre became, well… odd over time. From vast levels we got to virtual corridors with invisible walls, spamming the E to win and watching the spectacle taking place somewhere in the distance instead of actively being a part of it ourselves. Too many FPS games try to intrigue us with some sort of a story about X who is in trouble because Y, going on and on and never really giving us the satisfaction of solving that Y. And it used to be enough for the game to just start, hand you the weapon and let you enjoy yourself. This is exactly how the new DOOM starts. 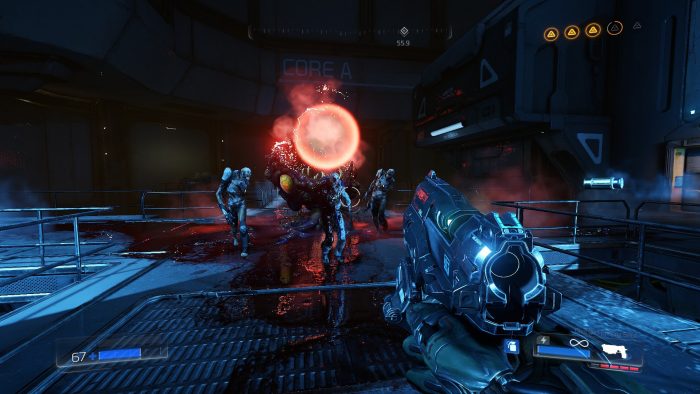 We can’t even remember the last time we played a game that just starts. It literally takes about ten seconds for your hero to wake up, pick up a gun from the floor and put a bullet through the skull of a demon that wanted to eat him for breakfast. The nameless protagonist of the series, known only as the Doomguy, is a man that had had enough – of demons, of crazy UAC Corporation that mines hell itself for resources and wants to turn demons into a walking arsenal. Grumpy, but without a single spoken word, his moves and actions perfectly depict just how much he couldn’t care less about everything and that he just wants to get his “job” over with and for everyone to leave him alone. It’s amazing that a game in a series known for having as much of a story as a McDonald’s hamburgers have actual meat in them, could actually connect all that mess from the previous games into something completely valid and so grandiose that it has a whole mythology surrounding our protagonist as the ultimate clean-up guy for when hordes of hell come bursting forth. But, just like to him, the story in DOOM is completely secondary. So is the gameplay and good? 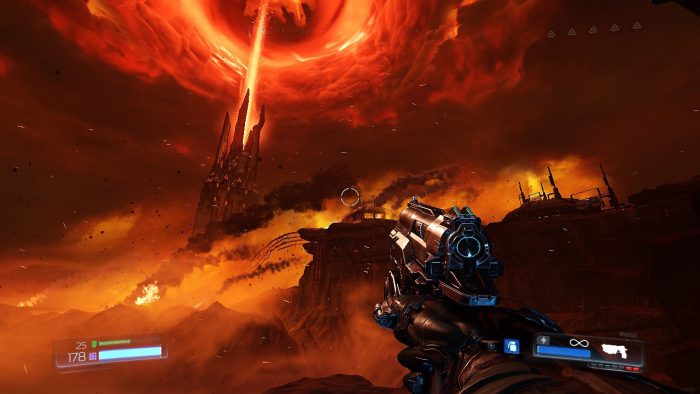 The game doesn’t only shine in this field, it completely destroys all unfaithful Thomas’ claims that a modern shooter needs walls, regeneration, a sprint button, and that you can’t be able to carry all weapons with you (MythBusters have shown that this is very possible!). Every confrontation with the hordes of hell is a spectacle of explosions, blood and limbs flying everywhere while you shuffle through your arsenal killing off a horde of horns and tusks that keep reaching for you while screaming for blood. You must always be on the move, strafing of jumping over obstacles, always in search for ammo or the next snot that needs to be punched. The action on the screen raises the adrenalin to an unbelievable scale, while you play without blinking, with bloodied eyes deep into the night, with a wide grin from ear to ear and excitement over many details and references. 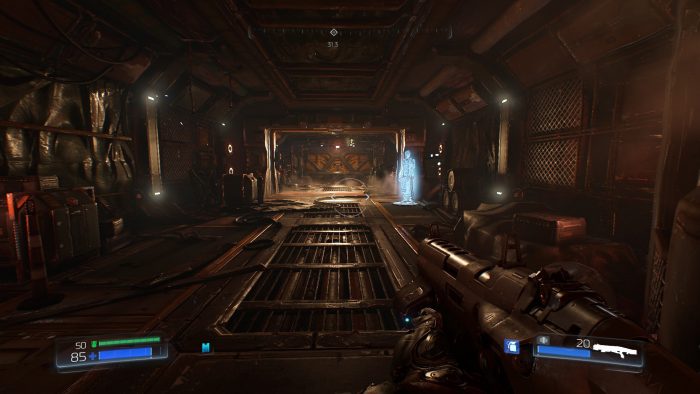 Still, this doesn’t mean that DOOM didn’t pick up some new tricks from modern games. More or less everything you do rewards you with some sort of a token for upgrading character abilities or weapons. After a few initial levels you’ll start collecting runes as well, passive bonuses that require completing mini-quests in order to unlock them and you can unlock two alternative firing modes for every weapon which expands the already rich arsenal even further. The shotgun with a laser grenade, plasma gun that occasionally sends out a shockwave around you or remote control activation of a bazooka rocket? You’ll have all this by the end and you’ll probably upgrade it too. The chainsaw is this time a mighty weapon with a limited number of uses but you’ll instantly split any enemy that’s not a boss in half with it and laugh heartily while doing so. There are also a few familiar things from previous games but we’ll leave it up to you to find and try out, because using every weapon in the game is really fun. 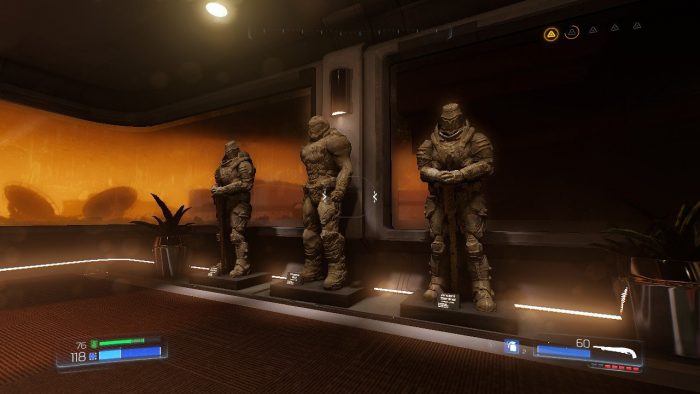 One of the interesting additions is the so called “glory kill” move, a very brutal fatality set of moves that will finish off wounded enemies. At first glance it seemed that these would become tiresome quickly but the satisfaction of their use as well as their variety didn’t even make us think that they might be an excess by the end of the game. But not only that – this way the game constantly rewards you for ending demonic (un)lives with extra health packs, ammo or ever armor. And they are unbelievably creative and violent, somehow fitting with the style of a marine who smashes a monitor in the beginning once his briefing is done. Without any exaggeration, layers with weaker stomachs won’t have a good time once they see some of the ‘glory kill’ animations. You can even do a little test – if you show your fairer half a glory kill of a Mancubus and she doesn’t turn green or pale, marry her! 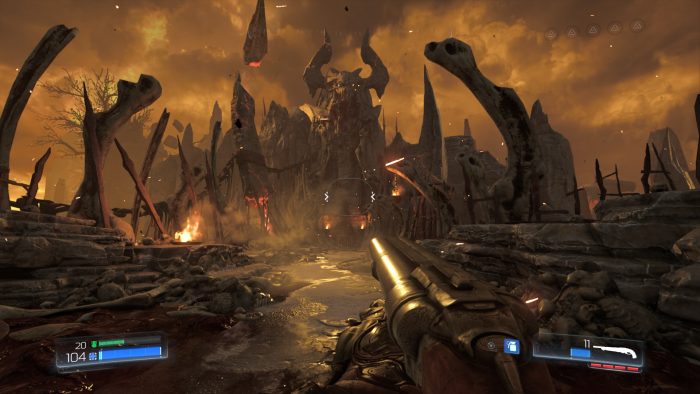 The solo campaign in DOOM is very long, almost 15 hours if you spend time exploring levels. In spirit of the original game, the new DOOM has huge levels with intertwining hallways you could easily get lost in if it weren’t for the map. The majority of passages and secrets make every one of the vast levels a real joy to explore. The campaign’s tempo is great and you’ll keep discovering or unlocking new things so you won’t even notice that it’s already been ten hours once you reach the end credits. Considering there are several different difficulties (the hardest one, Ultimate Nightmare, is unlocked after the first run through the whole game) and an enormous amount of secrets, you’re guaranteed to have at least one more go through the entire game, if not repeating some of the levels several times. 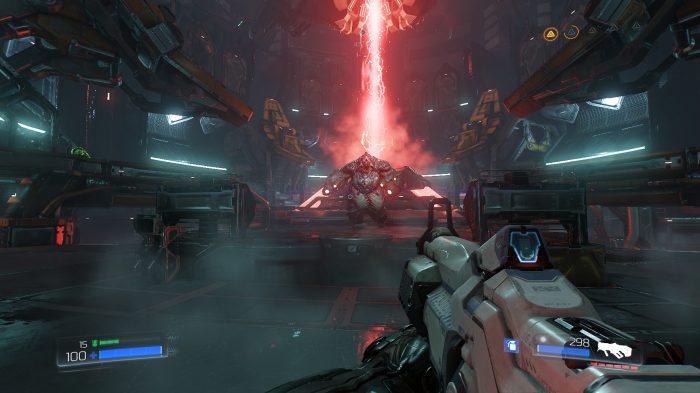 Once you tested out the campaign or you wish to take a break from it, there is a relatively mellow team multiplayer for 12 players and a handful of maps that didn’t make an impression in the beta and they don’t do so now either. It’s obvious that this was the responsibility of another studio and the speed and the feel of playing it reminds us more of Halo than the singleplayer component. But it’s interesting enough to spend several hours playing, and it’s the only opportunity to play as one of the greatest demons from the campaign. SnapMap on the other hand prolongs the game’s lifetime on your hard disk because like in the Trackmania games it enables the players to make new levels for solo, co-op or competitive play, by piecing together pieces of other maps. It has its limitations, mostly in the number of objects that a single map can hold and we hope that Bethesda and Id will expand their options. Besides that, using SnapMap we had an opportunity to play a few parkour levels, a sort of a farming simulator, to set the demons against each other in a Pokemon-like battle from Hell, and even solve a room escape. Not exactly a Super Mario Maker from Hell, but quite an interesting addition to the game into which you can sink tens of hours. 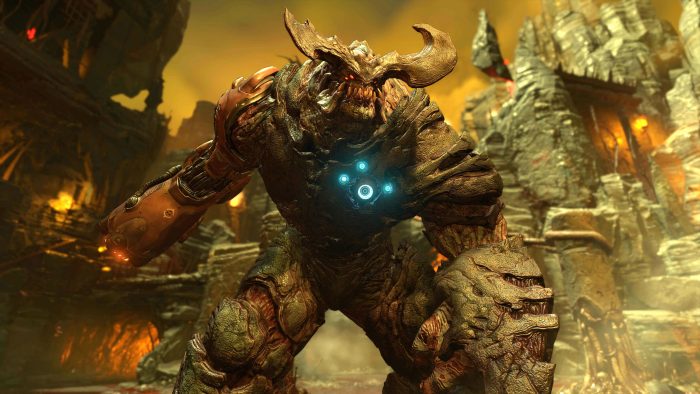 As a rare surprise in the world of high budget games, DOOM is a game launched without any technical issues on all platforms. The best possible compromise between old and new school FPS games, hyperactive ultraviolent experience that has been absent from the genre for so long, especially from the mainstream. The game completely deserves that its name is spelled out in caps-lock and we would give it our absolute recommendation.