Games that have the capacity to change the gaming industry in a certain way and leave a huge mark on their players, programmers and publishers only with their appearance, innovation and status are very rare indeed. These kinds of games appear perhaps a few times in a decade, but when you mention the “’Dark Souls” phenomenon now, five years after it was published, it immediately becomes clear where the story goes. 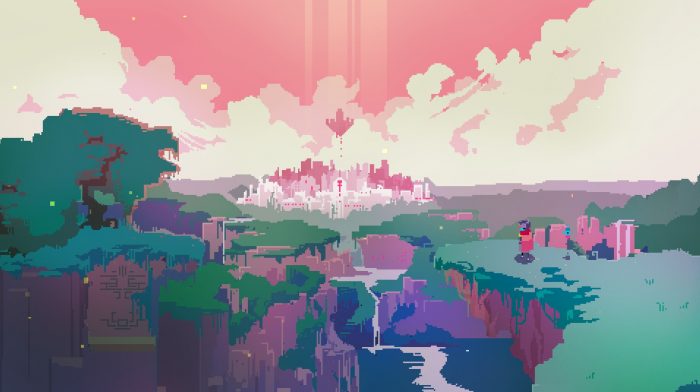 We’re witnessing a horde of titles which completely or in some segments, attempt to use a hallmark from a Souls game and attach a few epithets to them. Hyper Light Drifter isn’t the first, and surely won’t be the last title that got caught up in this trend – trying to get its own share of the spoils, and trying to have one big segment of it compared to the Souls saga. The only question now is how much they managed to succeed in this.

Hyper Light Drifter (or Drifter for short) is a 2D hack and slash game. There’s an occasional RPG element in it, but Drifter is as much of an RPG as an average Batman or Assassin’s Creed game. Therefore, expect a very action packed experience, if you decide to play it. 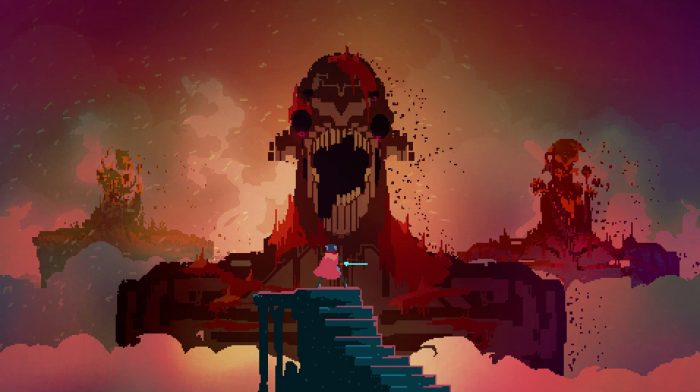 The first thing that catches the eye is a very specific visual appearance of the game. These days, pixel art has become a common occurrence, especially among indie publishers, and this game tries its hardest to be unique in this manner. It does so by building its atmosphere through a post-apocalyptic metallic-phosphorescent world, which sometimes looks fantastic, but at times looks very sloppily done. The visuals vary depending on where you are currently and whether you’re looking at a landscape created with care or some random hallway with barely two details in it. The background music is solid (if you like midi ambient music), although it can sometimes completely miss the theme and not fit the events on screen. 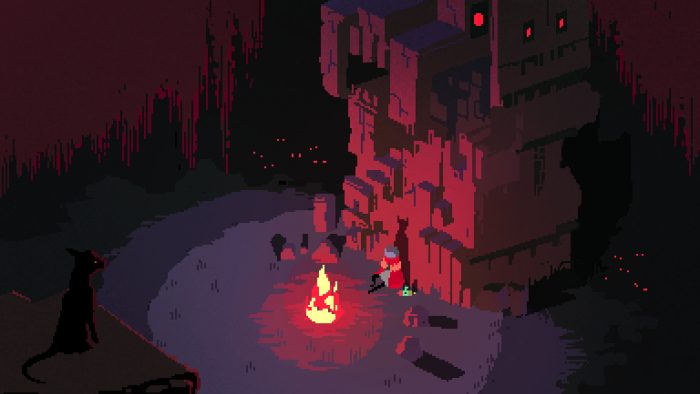 Drifter is an open world game in which, after the initial linear level, you can move from the central part of the map into your adventure, without guidelines or limitations, in any direction you like. During your journey you’ll go through hordes of very difficult enemies, with checkpoints that are at times too far from each other, and at the end of each segment awaits the zone’s boss for you to defeat. Sounds familiar? Well, it was about time we made a connection with the article’s introduction. But that system is excellent for all players who like challenges and it’s definitely better than the games that hold your hand and don’t let you fall provide. 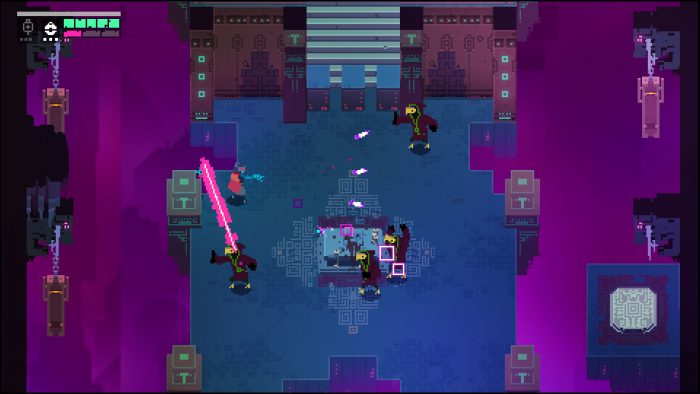 Speaking of falling, here is where you’re going to fall… very often. The game is very challenging and at times even too exhausting. Different things influence the difficulty and, sadly, the player has no control over many of those. First of all, the game is locked at 30 fps. For a game that accentuates reflexes and fast reaction, this is definitely not a positive thing. The difference between life and death is often measured in a millisecond and because of the engine’s boundaries, your efforts will sometimes remain unrewarded.

The second, equally as important thing is tied to the gameplay itself – the sheer volume of pixelated objects on the screen you will bump into and get stuck. Obstacles of grass, boxes and various stuff (which we can’t even name) will often give you a lot of trouble when moving around. That isn’t so bad when you’re exploring, but when you’re in the middle of a frantic fight with a bunch of enemies, and slam into a flower on the ground, it stops being interesting and gets more and more frustrating over time. 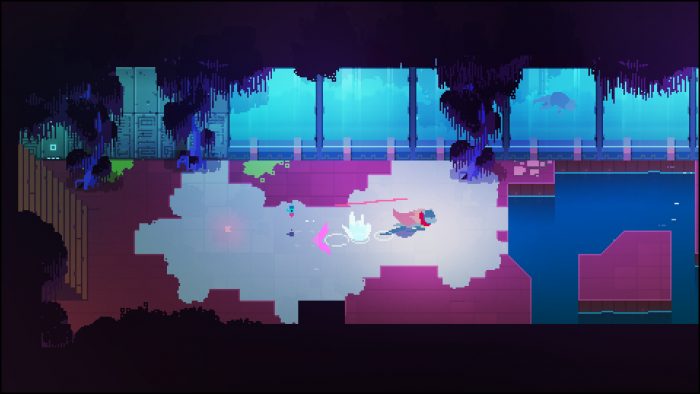 Of course, once you manage to waddle to end of the segment, the mandatory boss fight awaits. And we have to admit, apart from a few of them that don’t play fair, this segment of Drifter works rather well. Again, the influence of Dark Souls is obvious and most will recognize Pursuer and his moves while adventuring in the western part of the map. But the thing that shines the brightest and will offer you that pleasing sensation in which the rewards are needless and the only thing that matters is that you’re still on your feet is definitely there. And that’s what mostly drives you on. 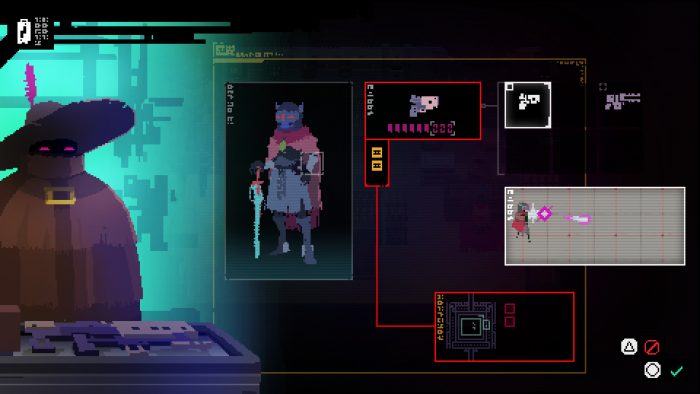 Who are these bosses, what are they doing here, and what does a Drifter do and what is his role in this post-apocalyptic world that the machines have (seemingly) taken over? These questions simply don’t have an answer. The story is very scarce, told only through an intro cinematic and a few images that a few NPCs “tell” you. There’s no text in the game, which adds to the very present confusion Drifter causes with its (deliberate) lack of explanations about its world. If you add a very poor and, especially in the beginning, unclear interface and the most inaccurate map (not joking) in the history of video game maps – you’ll slowly get the sense of what the game is like. There’s the overall impression that what little info about the world exists, is only there because it has to be, and everything is subordinated to exploration and combat, where, with the above mentioned flaws, the game can really shine. 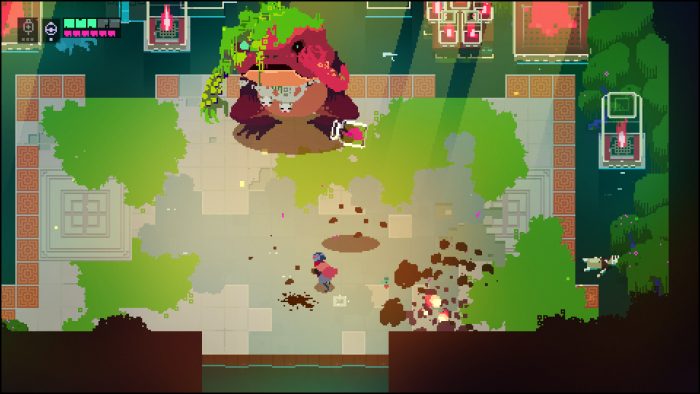 It’s hard to rate Drifter. It seems like a diamond in the rough that could have been more than what it really offers. It can shine in combat and the atmosphere and the visual presentation, but it can also sink quite low in those very same aspects. Once you add the mentioned unclear back story, the horrible map and often distant checkpoints, it’s clear that the game could have been much better.

If you’re willing to ignore the flaws this title obviously has, and feel like playing something challenging, hard, frustrating at times, but with the well known Dark Souls feel and a rewarding aftertaste, there’s no dilemma. It’s only unfortunate that everything points to the fact that this could have been an amazing game if only a bit more time and attention was given to it. Who knows, maybe if a sequel comes out, Drifter might shine in its full glory.