Another month is behind us as 2016 trudges onwards, and the game releases pick up their pace. This month was all about one thing: Souls. Souls of a Dark kind, that is. Not only did we see the release of the third Dark Souls game, but we’ve also seen a slew of games inspired in one way or another by this seminal series.

This month is all about dying over and over again – and loving it. The difficulty of Souls games has become the stuff of legends, and how the third game stacks against its illustrious predecessors? Read on and find out! Let’s just say that it didn’t fail to impress, and it deservedly graces our May cover. With the continued success of these games, it’s no wonder that many others try to draw on its elements and capture that feel in their own games. You might notice that many of our reviews reference them at some point or another, and it truly became a synonym for “hard, yet fair” and “a rewarding satisfaction” in the gaming world.

This month also saw a launch of an interesting experiment, in the form of Quantum Break – a highly anticipated high-budget game, which tried to combine the experience of both gaming and watching a TV show. Something that’s been tried before, for sure, but not on this scale. With the rise of digital media, the climate is perfect for this next logical step, and success or failure, we’re certain that this is only the first of many future attempts at combining modern media for an enhanced audience experience and immersion. VR is just around the corner, and we’re certain it will play a pivotal role in the next iteration of the next attempt of a similar symbiosis.

Ratchet & Clank is out as well, tying in with the movie of the same name. What’s supposed to be a kid’s game and an unnecessary prologue story may have proven to be a fun little space adventure for everyone. If some reports are to be believed, in this case the tie-in game might actually be better than the movie it ties in to. Flashy, hilarious, cute, and colorful, this game seems to have something for kids and adults alike.

On the DLC front, we saw the release of the first Mission Pack for Starcraft 2. It’s Blizzard’s attempt at keeping the game fresh and, dare we say, lucrative. This one features Nova, protagonist of their cancelled Ghost project from many years ago. Now’s her time to shine, and we’re there to help her uncover the intriguing plot that’s shaking the very foundation of the barely recovering human Dominion.

On the eSports front, our colleagues were “On the spot” in Warsaw, reporting from the World of Tanks 2016 Finals. Be sure to read their report and insights from the scene. We particularly liked the way the organizers handled the audience experience – from interactive flashing wristbands, mini-tournaments for merchandise, to VR spectating – they’re really setting an example many other eSports giants should follow in their own events. Or even improve upon – we won’t mind!

Read up on these and many others on the pages of our magazine, and remember – the summer’s nearly upon us and the gaming season is just picking up pace. This month featured many surprises, but next month promises to be chock-full of highly anticipated titles. 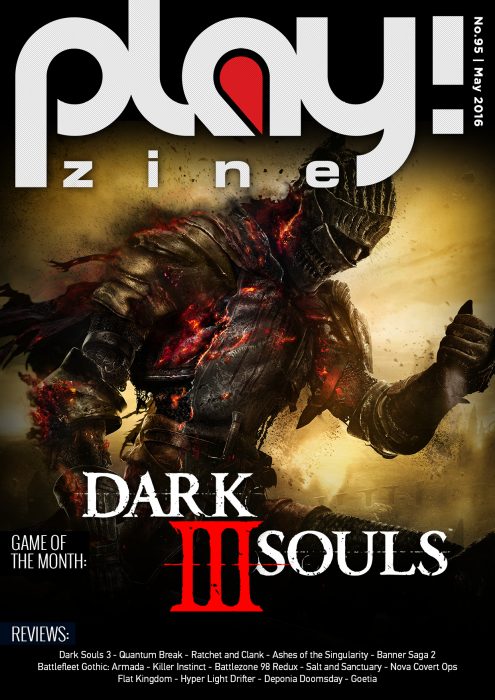