In the autumn of 2002, almost 14 years ago, Blizzard introduced the world to agent November Annabella “Nova” Terra, a member of the elite Ghost unit from the StarCraft universe. We were introduced to her through a presentation of their latest project at the time, third-person action/crawler titled StarCraft: Ghost. Ambitiously, the game was announced for all the major consoles at the time (Playstation 2, Xbox, Nintendo GameCube), but the events took an unexpected turn. The game was first cancelled for GameCube, only for Blizzard  to put the game „on ice“ in 2006. There were no news about the game for years, and many have already done mourning it, until Mike Morhaime finally declared the game cancelled in an interview with Polygon which took place in September of 2014. 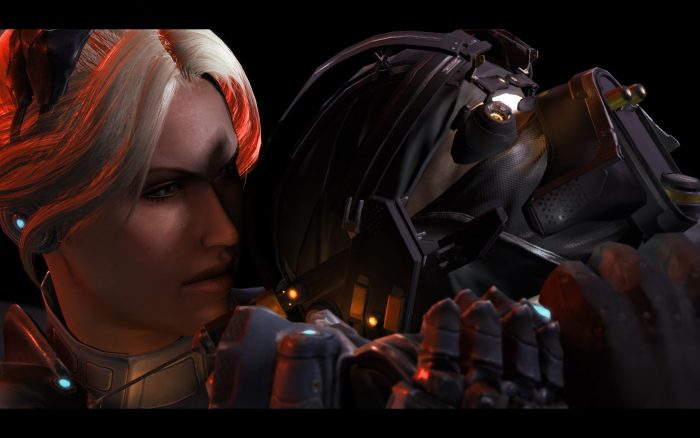 In the meantime, we learned more about Nova through the novel StarCraft: Ghost from 2006, and in the Wings of Liberty campaign. She even made her way into Nexus, where she fights side by side with other legendary Blizzard characters in Heroes of the Storm. Still, where StarCraft fans are concerned, this deadly blonde was always somehow overshadowed by her much more popular ghost-colleague, the famous Queen of Blades – Sarah Kerrigan. Justice for Nova and her never-released game comes 14 years later, in the form of a new StarCraft 2 campaign titled Nova Covert Ops.

Nova Covert Ops was announced at last year’s BlizzCon, as first of many mini-campaigns that Blizzards plans to release for StarCraft 2 after the conclusion of the SC2 trilogy, and therefore practically confirmed that they’re not giving up on StarCraft, as many had expected. These mini-campaigns will come in form of DLC content which players can buy over Battle.net. Nova Covert Ops will feature a total of 9 missions, split into 3 episodes (Mission Packs), which are cheaper to buy as a bundle, instead of each episode by itself. If you decide to buy them in a bundle, you’ll also receive a special skin for your Ghost units in multiplayer, and we know how irrationally pricey cosmetics are in games these days (look to CS:GO and LoL for examples), so perhaps the price of this bundle is fairly reasonable – especially if the missions are fun and have a great story. So, let’s see what Nova Covet Ops has to offer. 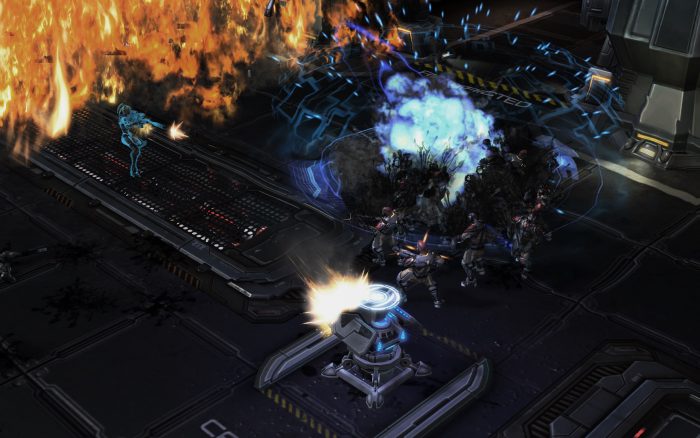 The first mission pack for Nova Covert Ops was recently released, containing the first three missions, and of course, we couldn’t wait to play them. In the weeks before the mission’s release, Blizzard conducted a very interesting campaign using encrypted messages on StarCraft 2 website and fake news on Twitter concerning the strange events happening in the Korpulu sector, which is an excellent introduction to a story about special units, because the information we gleaned from them were directly linked to the plot of the campaign. The story of Nova Covert Ops takes place a few years after the conclusion of the StarCraft 2 saga. Valerian Mengsk rules the Terran Dominion, and he (seemingly) truly wishes to return it to the path of progress. But, for unknown reasons, the Zerg have started attacking the Terran planets again, sowing turmoil among the populace, and leading to the creation of an organization called “Defenders of Man” who opposes the Dominion. 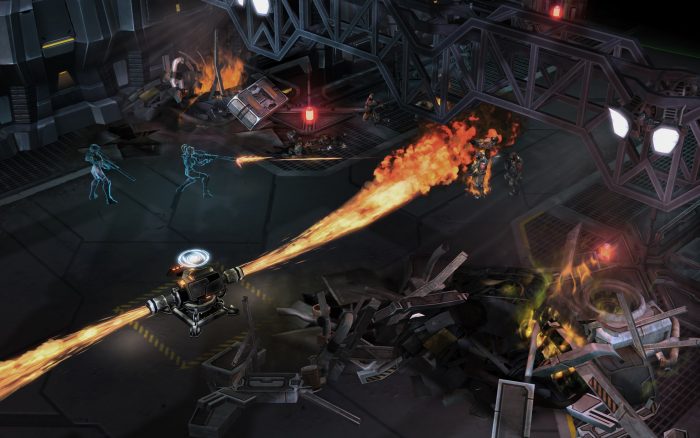 Amidst all this, Nova wakes up on an unknown DoM location, with no memory of recent events, and receives an anonymous message of imminent danger. And from then on starts the campaign. From what we’ve managed to see the plot looks very intriguing, and somehow reminiscent of old-school StarCraft vibe, with political machinations, conspiracies, and other dirty plots of the human species, which is also a huge left turn when compared to the space opera about the salvation of the universe that we played in Legacy of the Void campaign. Not that we didn’t enjoy the LotV campaign, but we’re glad to see this SC1 callback as well. 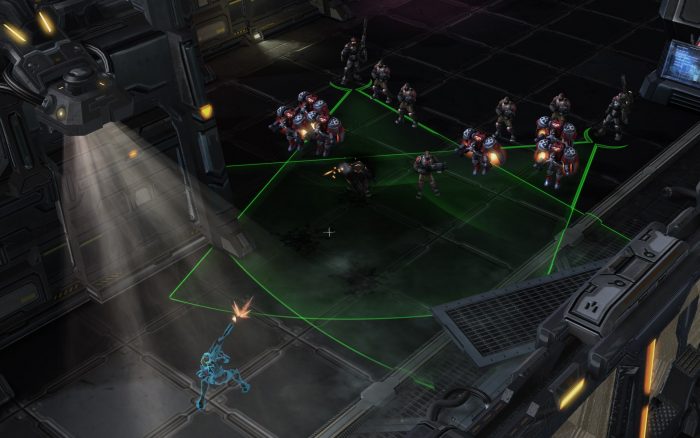 To be honest, we didn’t expect to have much to play with in only 3 missions, but it’s obvious that they were carefully planned and composed to offer maximum content. The first and third missions are essentially two missions each, and we were especially delighted with the second half of the first mission, which was a small homage to side-scrolling arcade shooters of old. In it, Nova and her companion mount a getaway through a busy highway, trying to avoid civilians while the enemies converge from all sides – front, back and above! It’s crucial to carefully balance between positioning on the screen and using abilities to eliminate enemies as quickly and efficiently as possible, as well as collecting healing “power-ups” that appears form time to time and which you can easily miss if you’re at the wrong place at the time. The climax of the mission is a boss fight (!) at the end, also in retro arcade style. It’s worth playing Covert Ops just for this mission. 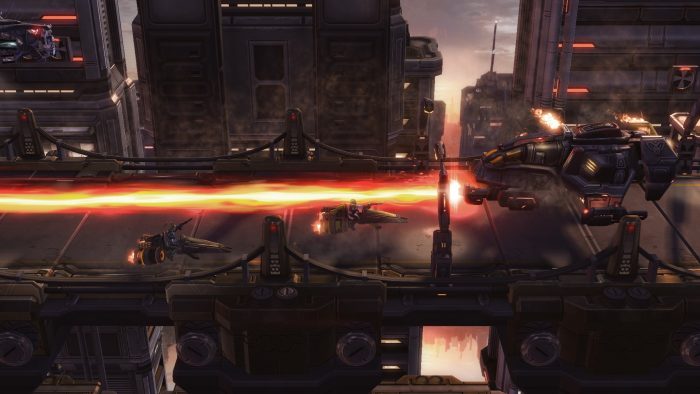 The other missions are combinations of RPG stealth missions and classic RTS maps. Two classic RTS missions feature goals like “survive for XY minutes” and “take x strategic positions”, so nothing new, but elegantly implemented and with interesting micro-maps that demand expanding strategy on the fly. In the stealth missions, you’re leading Nova through Defenders of Man facilities while trying to remain undetected. We felt that these missions were quite easy even on Hard difficulty, but still, these are only the first 3 missions in the campaign and they’re certainly going to become progressively more difficult as the campaign goes on.

Between the missions you can upgrade both Nova and your army with various items and technologies. Nova has 4 equipment slots (head, armor, main weapon, side arm), and each slot has several choices that you can customize according to personal preference or play style, or what you figure would best suit the mission. The same goes for units – every type of unit can have one upgrade allocated to it. Every unit has unique upgrades, like Jump Jets for Siege Tanks, and shared upgrades, which can be given to one unit at a time. 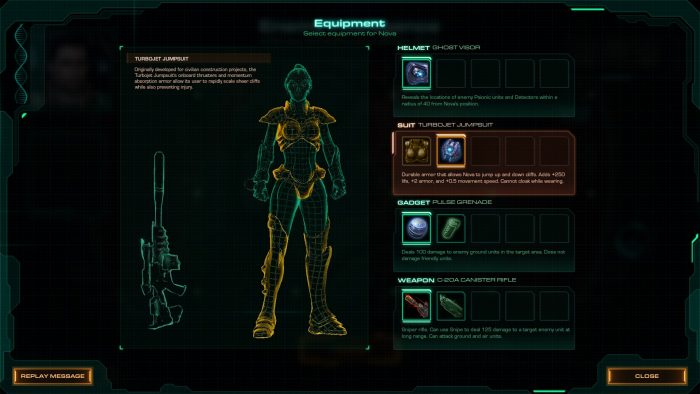 The locations are all new, and many new models were added to the StarCraft engine and we were especially amazed that on the second, snowy map, all Terran units were covered in snow drifts – a small detail that added a lot to the atmosphere of that mission, and players are already clamoring for these “snow skins” to be available for purchase and use in multiplayer. 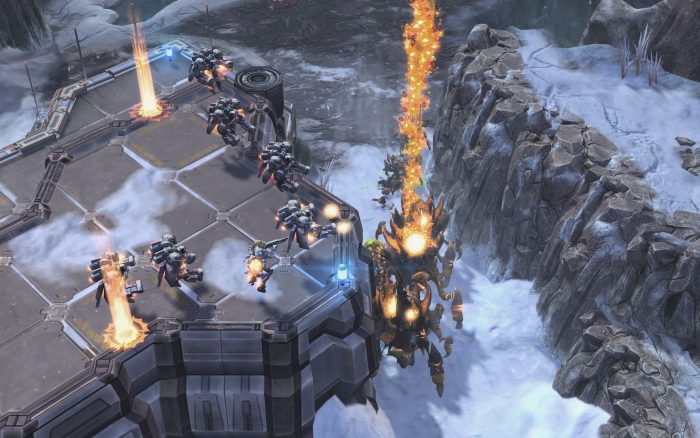 In the end, all we can say is that we’re very pleased with the first set of Nova’s missions; it all feels polished and fun and it’s always a pleasure to play Blizzard’s RTS campaigns because they’re the true masters of that old craft. We just hope that the mission release frequency picks up, because as it stands, Nova Covert Ops’ release alone is planned to stretch until the end of this year, which means only 9 missions in a full year’s time.