With the smart phones rising in popularity over the last few years we’re witnessing a development boom of apps and games for these devices, and the mobile app market became incredibly profitable. The very fact that every day over a thousand of new apps are being added to Google Play shows just how big this market has become. Joining this giant maelstrom are Lucky Mask Games, a three-member studio from Canada.

The studio has recently released their third game, Snipe Show, which is, of course, a hokey simulation (the guys are true Canadians after all). We had the chance to chat with Adam Carbone, 3D modeller and animator from Lucky Mask Games, who revealed to us what it’s like to develop a game for Android and iOS.

Can you tell us about your studio and how you got into game development?

James, Mike and myself all attended the Toronto Film School for Video Game Design and Development. Through our time together at the school we had the privilege of working with each other on a number of projects. Following graduation where James, Mike and myself finished 1,2 and 3 at the top of our class we decided to continue our working relationship and created Lucky Mask Games. 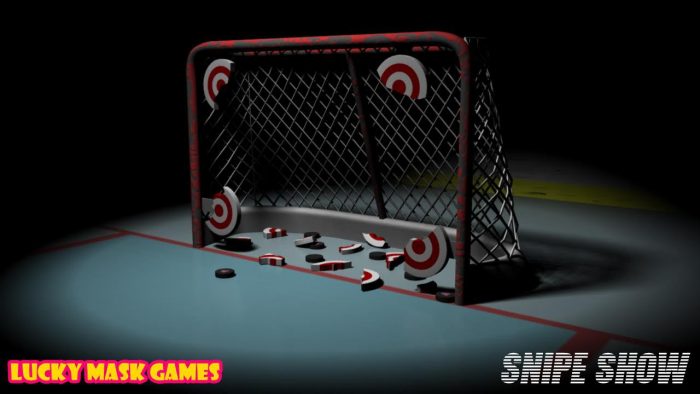 They say hockey is Canadian national sport. But in what other countries is your game gaining popularity?

We’ve gained popularity in other Hockey influenced countries like the Czech Republic and Sweden to name a few. Russia, Finland and Germany have also showed love for hockey and Snipe Show. They say that Hockey is a Canadian sport but the NHL playoffs just started and you can’t find a Canadian team in them ahah.

Your game is available for mobile devices. Can we expect a PC or console port in the future?

At this time we aren’t planning on one. But, it’s not off the table if Snipe Show really gets popular we might make the port for PC.

Speaking of mobile platforms, who was easier to communicate with – Google or Apple?

Well, Google Play Store is pretty much submit and wait a couple of hours to upload, opposed to Apples review which could take a couple of weeks. In terms of communication I would say both companies have a pretty responsive behavior to developers, personally I don’t have a preference.

How difficult is to compete with free to play apps with a paid app on mobile market?

Very difficult. The market is so saturated that it’s nearly impossible to poke your head out and get noticed. 1000 of apps get submitted daily, most of them free. How can you argue with free? We believe with Snipe Show we’ve made a good case to charge for it as the game has hours of gameplay plus an online leaderboard that is rapidly growing which is making the experience a lot more challenging.

Was there a particularly difficult stage of developing Snipe Show?

At some point developing any app can get difficult. For Snipe Show we had some breezy moments where things just worked and looked right, and at other moments we were banging our heads off our desk’s thinking of solutions or fixes. One thing that was interesting to get around was how to challenge someone through our online VS. mode. Do you ask to play someone and wait for an answer? Do you have to accept a challenge? So what we decided was if you’re playing online you’re open for anyone to challenge you. If you decline the challenge no harm happens to your record. But when issuing a challenge you don’t have to sit there and with for the challenge to be accepted, instead you’ll play your round and wait for the other user to play his or deny your challenge, We thought if you’re active on the online mode there’s really no need to deny a challenge unless this particular user has gotten he better of you more than once.

If we may ask, which is your favorite hockey team?

Haha you may not ask……. It’s the Toronto Maple Leafs.

What are the future plans for Snipe Show and Lucky Mask Games?

As of right now our focus is on supporting Snipe Show. We have some ideas for future updates to keep the game interesting and exciting for our users. We do have some awesome giveaways thanks to some awesome companies we’ve partnered up with coming up in the next couple of weeks. Besides supporting Snipe Show we have other projects on the back burner that we’re excited to get working on. But they’re far from ready to even talk about.