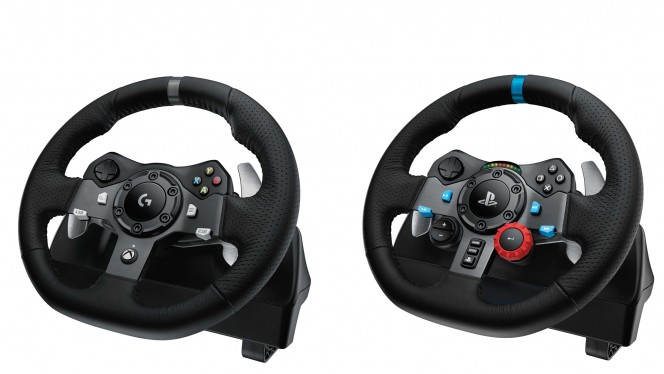 With Logitech, we got us used to the fact that they send us really good quality peripherals to test – mice, headphones, keyboards, mouse pads, etc. However, this time we received three very large boxes with a different kind of controllers – car steering wheels.

Why do we need two of them?

We received two wheels named G29 and G920 that are visually very similar but intended for different platforms. That is why we will cover the differences first, and then treat them as the same device, because they’re essentially are just that. The G920 is intended for the Xbox One and PC, so it has the adequate buttons and settings that match a console controller. On the other hand, G29 is intended for Playstation 3 and 4 consoles and has adequate keyboard layout. The only noticeable difference we could see is that the G29 has LED lights at the top that indicate when you need to shift gears, like in a Formula 1 car, whereas the G920 doesn’t have this feature – we have no idea why. G920 is advertised as a steering wheel for the PC, but when you look at the specifications for the G29 you will notice that it too can be used on a personal computer. So if you want to use it on a PC you can choose either of the two, but if you have a console also or you’re planning on getting one, you will want to think that through. Considering that they cost the same the G29 seems a better choice for the PC, since it has the LED lights. The third box we got is the Driving Force manual gear shifter, sold separately and compatible with both models. Besides the button configuration all of the other features – craftsmanship, materials used, pedals, etc. – are completely identical. 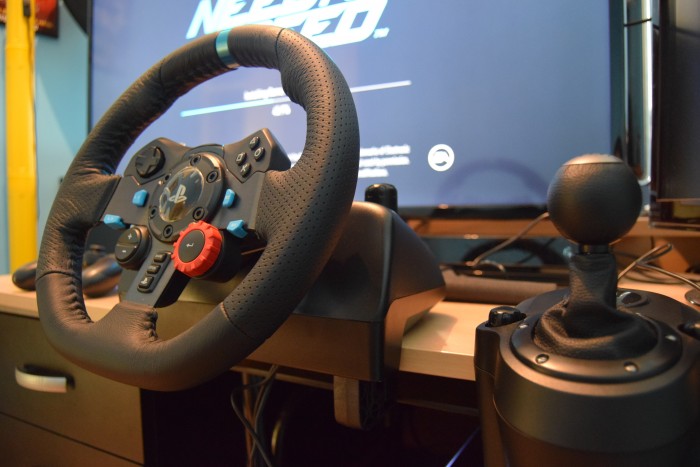 Installing the steering wheel and setting up the environment

When thinking about a device such is this you should always keep in mind that it isn’t just another controller on your desk or in your living room. You need to create a complete feel for sitting behind the wheel, which requires some space so you might need to adjust the furniture in your gaming area, the position of your screen, the placement of the pedals… However, if you’re using one of these wheels you’re creating a full driving simulator environment and it takes some compromises. The good thing is that Logitech created a revolutionary system for attaching the wheel to a table or other surface which is intuitive and easy to use, yet produces great results – when properly fastened the wheel won’t budge a millimeter even in high intensity situations. The same could be said for the manual gear shifter. On the other hand, the pedals are really heavy and massive but still we would suggest putting them against a wall or other heavy object so they won’t move when you press them hard during driving. Of course you can always consider purchasing a full racing simulator setup kit that is attached to the ground and has specifically designed positions for the seat, the wheel and the pedals. We tested one such system on the E3 Expo last year in combination with the G920 wheel and the impression is fantastic. However such a setup may cost as much as the wheel itself, but a bigger problem may also be finding a dedicated space for installing it.

All of the connections are properly marked – you attach the pedals and the gear shifter to the marked ports on the wheel that look a bit like the old serial ports. There is also the power adapter that is used for the internal motors of the wheel, but everything is really easy to find and connect. 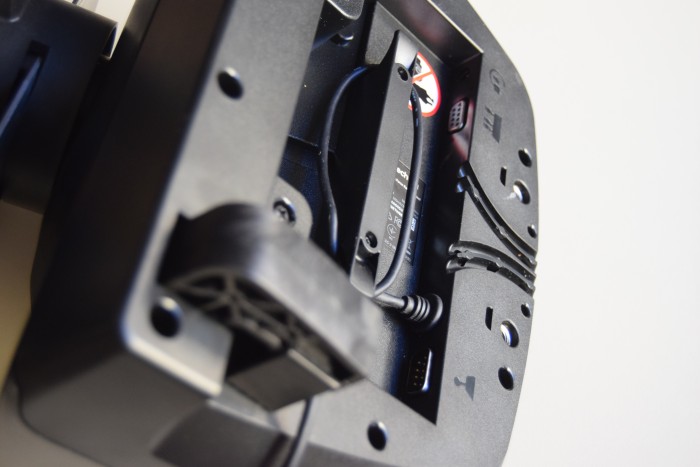 Considering that these are top driving peripherals from Logitech it was expected that the build quality is at the highest level. The wheel itself is coated in very fine leather, all of the buttons are of highest quality, and we are especially pleased with the metal shifter pads behind the wheel. You really get the feel that you’re holding a true racecar steering wheel in your hands. The pedals are massive and made of metal so I doubt any wear and tear might occur on them over time. The manual gear shifter is also coated in leather, it has a short and precise movement, but it requires some getting used to because the different gears are so close. 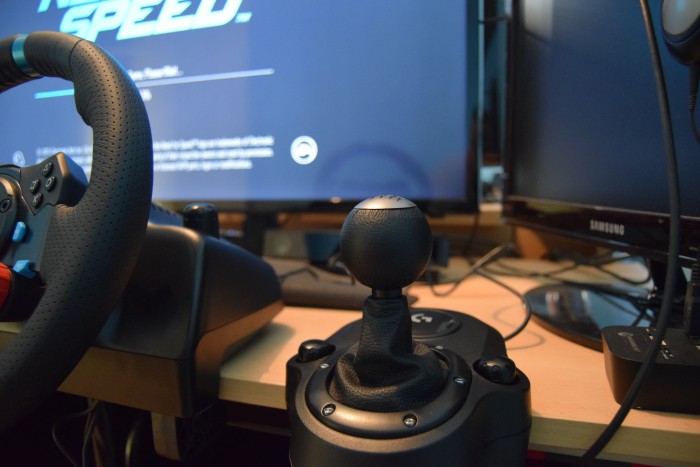 More importantly, the wheel has force feedback through double electric motors installed in the base which enables you to get the exact response that you would get in a normal car. The same goes for the pedals – there isn’t a feeling that you just need to press on the brake, the pedal has a progressive measure of resistance based on the situation in the game so you will need to press it harder if you’re going really fast and want to break hard. 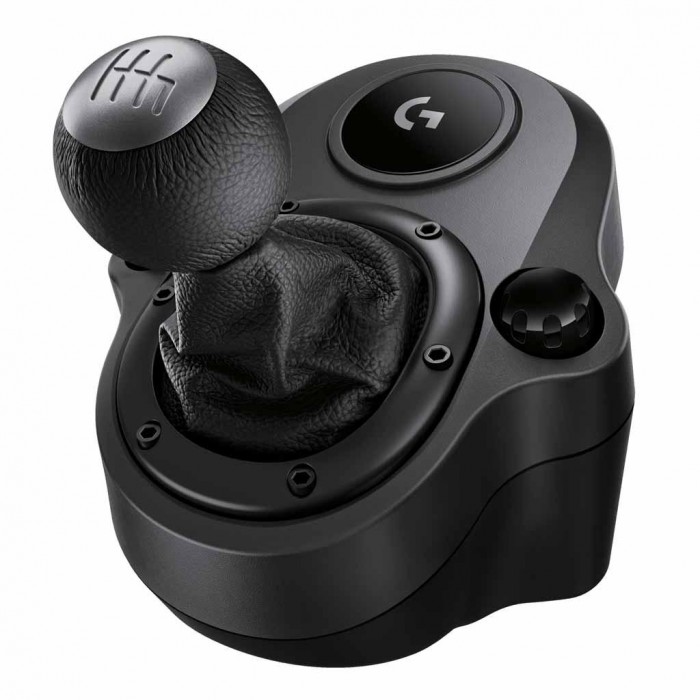 The first thing to note is the selection of games you have available to truly support all of the wheel’s features. One of the best suggestions is Project C.A.R.S. which supports all of the features, but there are also the Grand Turismo games, Forza Motosport and others. Some games have a limited support, for example Drive Club for Playstation 4. First, you’ll need to download a pretty hefty update to get the support for the wheel, but even then the game itself doesn’t support manual gear changes using the clutch pedal so you drive it more like a sequential shifter which dampens the experience. However true driving simulation fans, the ones that will benefit from such a wheel, will probably not even consider these arcade style driving games. 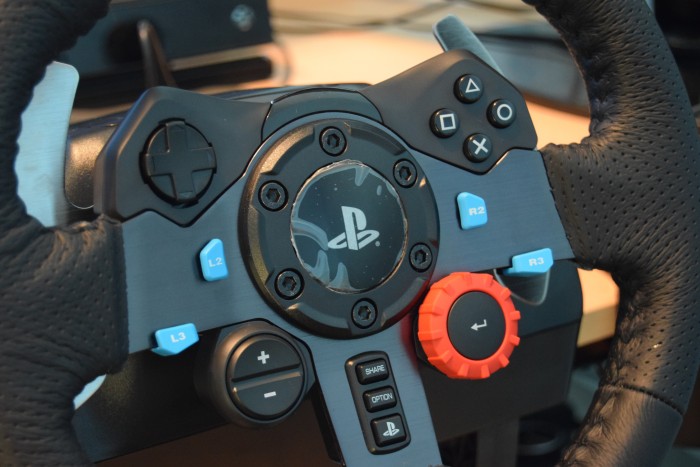 Once you get behind the wheel of this thing and go through a serious lap on the race track you realize that this is much more than just a controller. The motors inside the wheel create resistance in turning a corner so you get the exact impression of how much force you need to apply and how fast you can go to be on the very edge of sliding, exactly like in a real car. The brake force is also distributed according to the situation in the game which adds another layer of realism. If you managed to create an environment where you have a good sitting position and a large screen in front of you, you can easily forget that you’re just playing a game and think that you’re in some hi-tech racing simulator. You simply need to experience the sensation in order to really understand it. 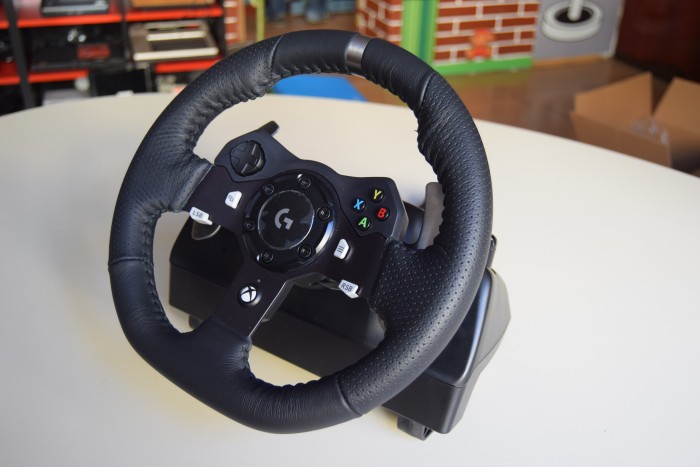 This is a product that will probably remain out of reach for most of the gaming population because of its high cost. The steering wheel itself costs as much as a next gen console, and keep in mind that the manual shifter is extra. You also need to create space for something like this – we even had problems testing it in our office – and in the best case scenario you will buy a racing rig that can cost as much as the wheel itself.

On the other hand you have to consider that this is something closest to a professional driving simulator that you can get on the market. Saying farewell to this device after numerous days of extensive testing wasn’t easy at all.