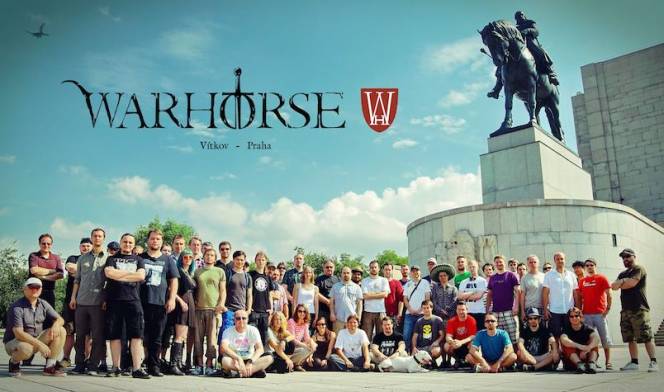 We had an opportunity to have a chat with the guys from the Czech developer, Warhorse Studios. We talked about their founding, their ideas, their approach to game development, and their Kickstarted medieval game, Kingdom Come: Deliverance.

PLAY: How was the studio founded?

Warhorse Studios: Warhorse Studios was founded in the year 2011 by two guys sitting in a pub, which is actually quite a common approach in the Czech Republic for good ideas. The idea was to get a bunch of veteran Czech game developers together, lock themselves in the basement and come out with a unique game that is historically accurate and as realistic as possible.  We had to quickly realize that this will be a tough challenge.

PLAY: Why did you choose to portray the medieval setting?

Warhorse Studios: It has several reasons. One for sure is, that we want to tell the story of our Ancestors. And this is not only Czech history but in fact European history as Bohemia was the “capital” of the Holy Roman Empire. The other reason is that no one ever covered this period before in an RPG, nor you have all these slightly realistic games where you have realistic parts but there’s always this slight addition of fantasy elements. We want to tell a story that is really kickass and interesting It was very interesting to research because nearly every event, NPC, building, and natural landscape existed or is still existing today.

PLAY: From today’s perspective: if you were doing a Kickstarter campaign again, what would you do differently?

Warhorse Studios: Looking back now at the Kickstarter we are happy that we decided to take part in the campaign. At that time It was the only possible option to survive as studio and continue following our dream: development of KC:D.

It was a sink or swim situation for us because without the successful funding we would have to close the studio. Luckily we swam and became the 3rd most successful Kickstarter Campaign in 2014. In general Kickstarter is a good thing but it also gives you a special responsibility. Since we are crowdfunded we want to be as close to the Community as possible. That’s why we decided to have updated Alpha and Beta versions. We want to show every step in development, show the first drafts of new features and always gather feedback. This is something we would definitely do again and recommend everyone – get in touch with your community and try to create something awesome together!

PLAY: Did Mount & Blade somehow influence the development of your game and if yes, how much?

Warhorse Studios: Of course we are following the success of games like Mount and Blade, Witcher or Skyrim. Of course we are inspired by those gorgeous games. But like in every game development industry we take what we like, we avoid what we dislike and we add what we think is cool. On the other hand we are creating something that wasn’t there before – Dungeons & No Dragons, a realistic and historical RPG that is focusing on a strong story and avoiding magic and dragons.

PLAY: You have set the game in a realistic setting. Will we maybe encounter some historical personas?

Warhorse Studios: Your assumption is right. The setting of Kingdom Come: Deliverance is based in 1403 South-Bohemia and talks about the Hussite Wars that break out several years later. Nearly every NPC you will meet, at least the important ones, are actual historical characters which will do what they actually did back then. That’s also why we have a full time historian in the team. She is double and triple checking every design element in the game and also researching about historical persons. What you can already see is that we talk about struggle between King Wenceslas of Bohemia and King Sigismund of Hungary, both sons of Charles the IV from the house of Luxembourg. But there will be more people you might know from your history lessons at school.

PLAY: What would you pick as the most important aspect of the game, something that defines the whole experience of the game?

Warhorse Studios: I think that the most important fact is the fact that we are bringing some long gone era back to life and people will have chance to experience what it’s like to live in the 15th century. See our history and that magnificent architecture as it once looked. We are creating a time machine to take everyone 600 years back in time and its damn exciting and fun.

Our game is a mix of realistic and kick ass story, full of exciting quests, fun and realistic combat, outstanding graphics and large scale battles! What is there more to wish for? :)

PLAY: What was toughest obstacle during the development of the game?

Warhorse Studios: When we started to work on the game we thought that creating a realistic game is easy since you can take things from real life and just have to transfer it into the game. But we had to quickly realize that it is an even tougher challenge than creating something fictional since you have to come up with reasonable explanations for everything you do. It’s even harder if you take in mind that we are first person only, so even the visuals must be outstanding to create the level of immersion we want to achieve. We had to do compromises due to technical reasons. So the biggest challenge for sure is to find the right balance between historical/realism and fun gameplay. That’s why our historian and our creative director are in an everyday struggle. But we believe that we found the right balance in Kingdom Come: Deliverance. You can get a glimpse of that in our actual Beta.

PLAY: Why did you choose to develop the game in Cry Engine and not for example in Unreal or Unity?

Warhorse Studios: In that time we decided that this engine is the best one to bring our vision of an outstanding game to the monitors. Even though we still need to adjust it a lot since the CryEngine was made for first person corridor shooters.

We need daily cycles, dynamic weather changes, hundreds of NPC’s, a huge AI system that runs the world etc. etc. But our team is very talented and is always customizing the engine to our needs.

PLAY: You are optimizing the game for consoles, right? How difficult is that? Have you found any problems in Hardware?

Warhorse Studios: We want to deliver the best experience possible for each platform. Of course we will be making some of the changes due to optimization but still we are focused on producing high-end graphical experiences. Quality is very important for us.

PLAY: Do you have plans for the next project? Some new theme or genre?

Warhorse Studios: When we started developing KC:D we wanted to tell one huge story. We wanted to cover all the Hussite wars. During development we understood that it is not possible to cover this sheer amount of information. We decided to split our game in several parts. KC:D is a first instalment of our story. So prepare for more engaging stories and gameplay experiences from Warhorse studios.