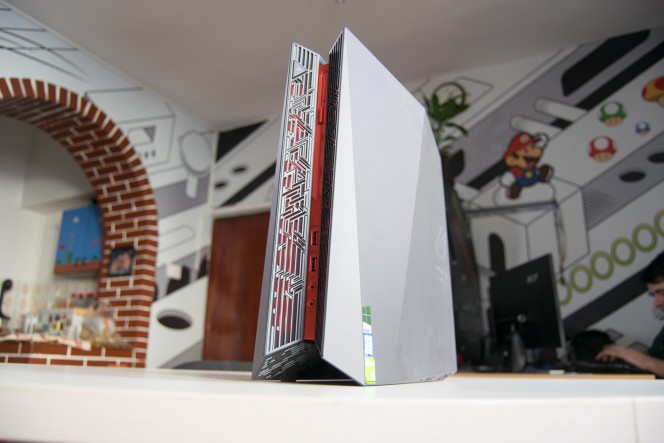 PCs designed specifically for gaming are often much more powerful than gaming consoles but are also not the best sight in your living room – too big, noisy, heavy. Asus has decided to make a computer that will have close to maximum performance on the market, yet be small and silent enough and visually appealing to be a great addition to your living room. That is how the Republic of Gamers G20 was born.

When we look at the specifications of this computer it’s more than evident that it is in the very top of what PC hardware has to offer at the moment – Intel Core i7 6700K processor that is clocked at 4.2GHz, 16GB RAM, 256GB SSD and a 1TB hard drive, and to put the cherry on top – a GeForce GTX 980 graphics card with 4GB of video memory. In conclusion, if we wanted to create a high-end gaming system at the moment we would probably go with a very similar selection of components. And that’s fine for a desktop machine, but the real surprise is when you see what form factor this is packed into. 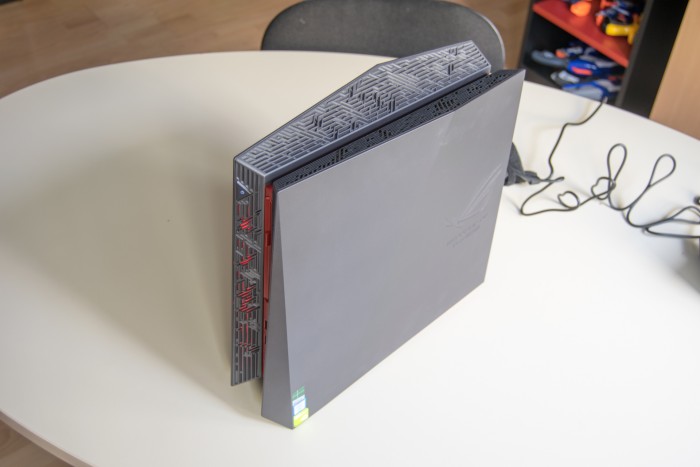 Everything you need in a really small space

When you first see the RoG G20 you immediately get the feeling that it was designed to compete with gaming consoles for living room space. It’s a bit larger than an Xbox One, and more so than a PS4, but the design is really eye-catching so you probably won’t notice the space it takes up. One interesting feature is the LED lightning that goes all the way through the case, and you can change its intensity, color or color change pattern via the included software. The visual impression is quite stunning. One thing we noted is that because of its angled edges you cannot put the computer in a horizontal position like its console counterparts. 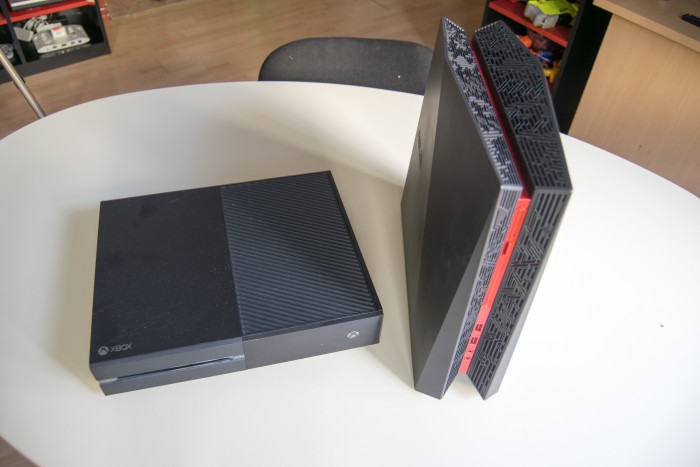 It is trying to prove that its place is in the living room even with the number of connections it has – on the front side you will find a Blu-Ray drive, two USB 3.0 ports and microphone and headphones connectors. It should be noted that one of these USB connectors is marked for charging gadgets such as a phone or a tablet. On the back you will find all of the usual connections for a PC, but it’s important to note that it has built-in WiFi and Bluetooth adapters. Speaking of networking, we should also point out that the installed Gigabit Ethernet adapter supports Intel Game first technology which will prioritize you gaming traffic. Included in the box are keyboard and mouse, but of the most basic kind, probably just for installation purposes since a true gamer will probably buy something more advanced. 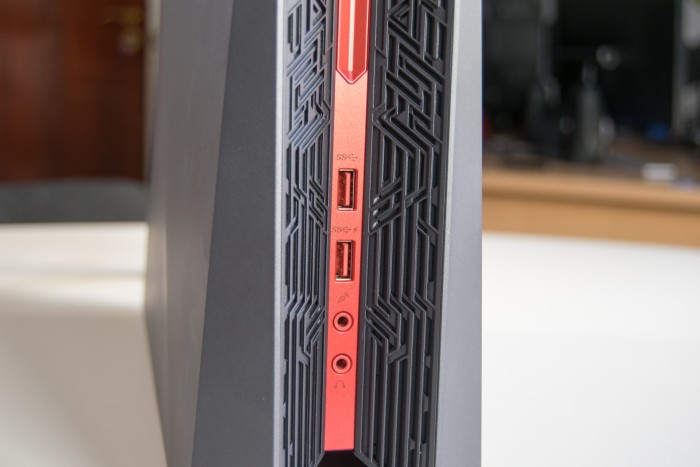 Because of the small form factor the power supply had to be put outside of the case itself.  The power supply actually looks like two large laptop adapters put one on top of the other. After a few office jokes about how Asus had a surplus of notebook adapters so decided to give some away we started digging into the reasons for this. And what we found turned out to be quite impressive. We all know that high-end graphics cards consume a lot of power and need to have additional power brought to them, and this is exactly the purpose of the “second laptop charger” – it only powers the graphics card. But why didn’t they use just one big power supply? Well it adds to flexibility, you can always opt not to use the second power unit, save some power, and connect the PC as a media center via the HDMI port located on the motherboard itself. The only problem with that is that we absolutely see no reason to buy a computer like this and not use its full potential. 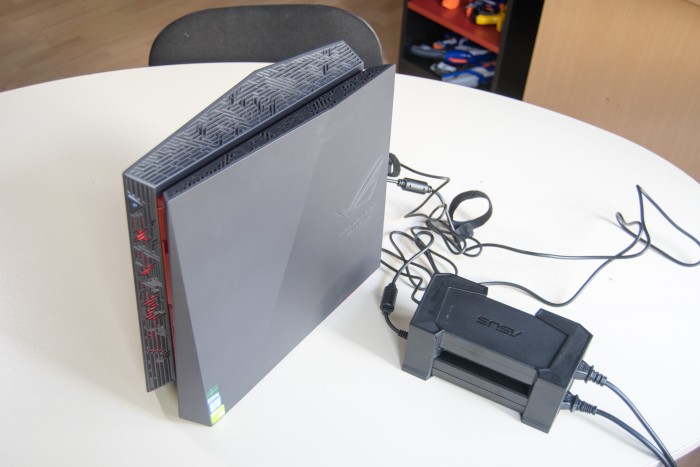 And what is it like to play games on a RoG G20?

The first thing we noted was the cooling system. The impression was that it’s completely flawlessly designed – the computer didn’t show any signs of overheating during long gaming sessions, it remained cool and almost completely silent. We have to praise the engineers that designed this because from time to time we couldn’t even believe how smooth it ran. 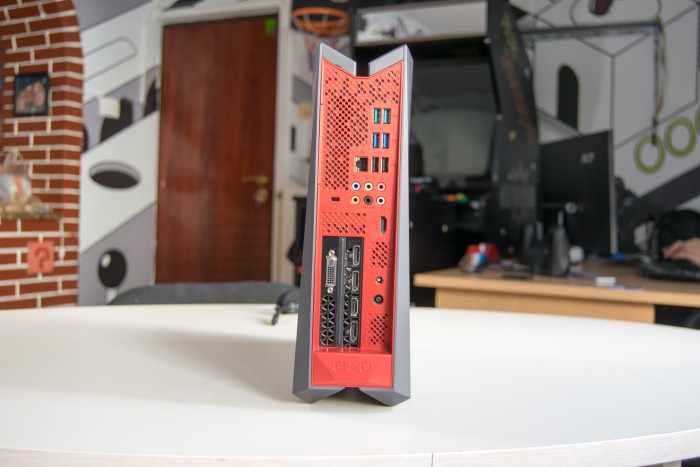 When testing hardware like this we wanted to try out some of the latest titles, but not only in Full HD – we wanted to go a step further and test on a 27” 2560×1440 resolution monitor, or 1440p as it’s also called. And here we have some mixed feelings, not because the G20 failed in any way, but because we expected a bit more from the highest end mainstream processor and almost the fastest graphics chip. Demanding games like Witcher 3 or Assassin’s Creed Unity on ultra-settings ran at about 40fps, which, although playable, wasn’t too impressive. Of course if you reduce the details by a small margin and put it in Full HD the numbers are more than good, which means that a PC like this is future proof for some time. On the other hand it was amusing to test some of the popular games like CS:GO or World of Tanks in 1440p resolution, with details on max and frame rates in three figure numbers. Unfortunately we couldn’t get our hands on a 4K screen to test, but we are planning to do so in the future. Of course, most of the living rooms TVs nowadays are at Full HD so you will be able to play all present and future games, certainly much better than on feeble consoles. 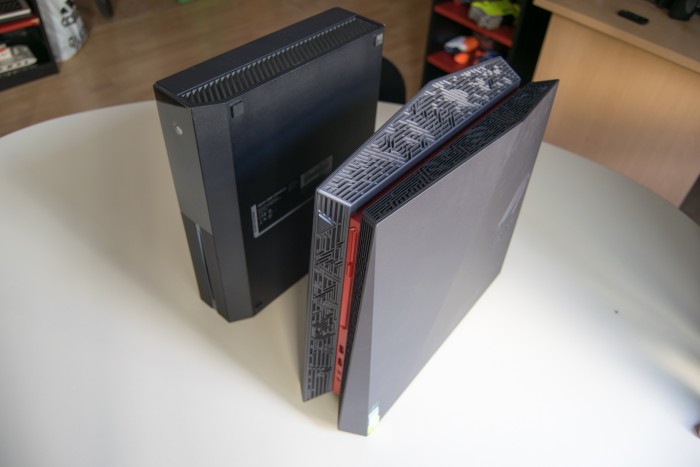 The pleasure comes with a price tag

Judging on just the hardware the RoG more than met our expectations – it uses the best components a PC can offer while being small and silent, a true all-in-one wonder. Of course, that comes at a price, by comparing it to general prices of components on the market we came to a conclusion that it is about 30% more expensive than a similarly configured desktop. And keep in mind that even such a desktop doesn’t come cheap. 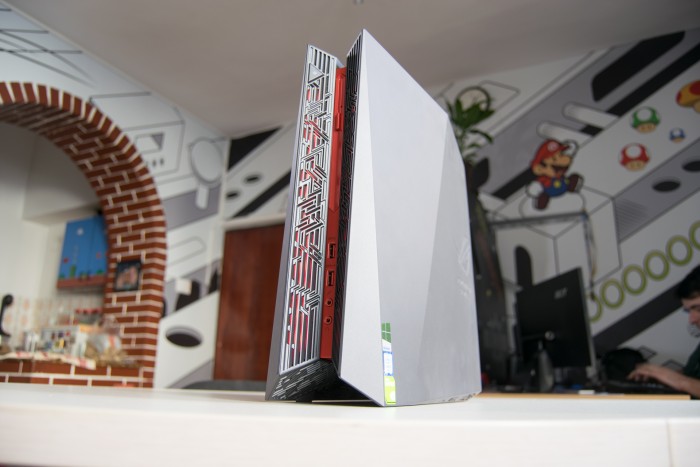 In the end we can conclude that all of us would want a machine like this either on a desk or in the living room because this is the best gaming hardware in a small, lovable and practical form factor.