If videogames could talk, this would be heard from the space on your hard drive where RunGunJumpGun is installed, a small indie title that succeeds where many have failed over the years in the oncoming title wave of „ruthlessly difficult indie games“.

Since the Kickstarter boom till today, the market has been overflowing with games that try to deconstruct elementary gaming concepts and try to distill the gaming experience and then forcefully feed it down players’ throats in hopes of becoming the next instant phenomenon or at least a cult classic.

However, they mostly end up as showcases of how difficult that task is. 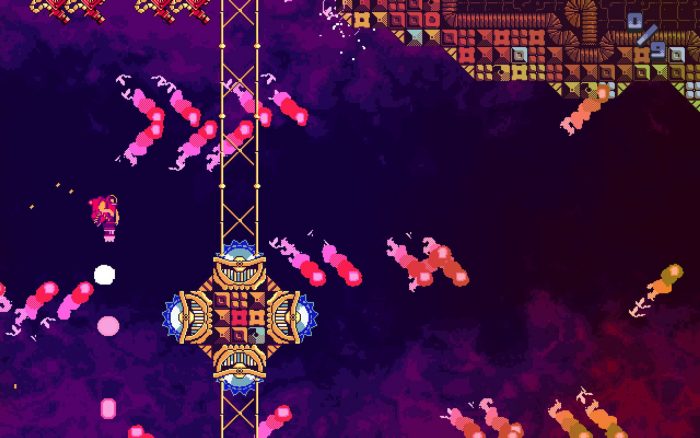 Many of them under-deliver, and gnawing on their bones is something that‘s not really enjoyable and is never remembered as good. Some even go so far in their delivery that those bones get stuck in the players’ throat, and they’re a cause for frustration until one final Alt+F4.

Still, some of the developer teams get a visit from their muse, the alchemy works, and they manage to find that near-invisible thread that allows their creations to spread their wings and dance their pixel-dance.

This year already gave us a big surprise by deconstructing the FPS genre and a nightmare arena called Devils Daggers, and from the other side of the spectrum, joining those rare carefully molded pearls, us RunGunJumpGun – a challenging 2D scrolling fury that scooped up a bit of Downwell (and turned 90 by degrees), a pinch of Super Meat Boy, and even some Flappy Bird. 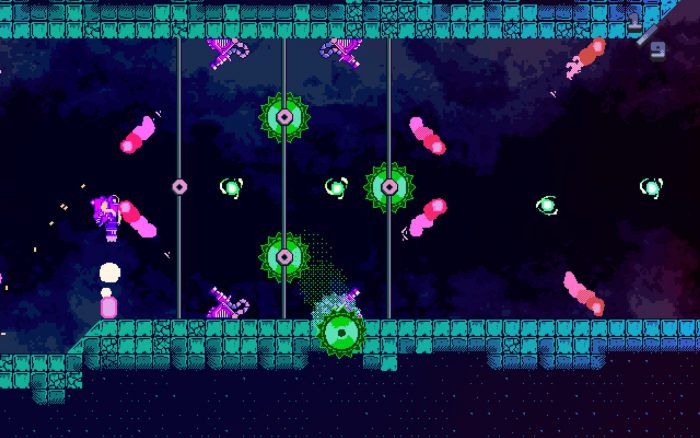 RGJG casts you in the role of a buff guy in space suit that seems to have originated at the transition from 8bit to 16bit era and that holds some futuristic version of a Gatling gun.

Since this guy doesn’t respond to standard up-down-left-right commands, making the game a partial endless runner as well, the only way to control him is with ‘fire’ buttons.

There are a total of two, along with a restart level button, and those are all the controls you have at your disposal. One button shoots in front of the player to clear the way and the other propels him upward (like in Flappy Bird or Downwell).

Your mission is to safely escort your guy through dozens of relatively short levels, while you destroy obstacles, dodge projectiles, spikes, saws, lasers and energy fields – all by using only bullets and a gun induced propulsion. 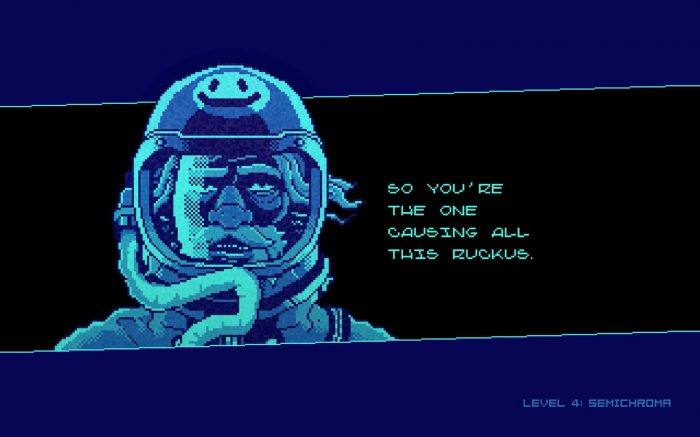 You can collect certain “atomixes” along the way that serve a dual purpose. A certain number of atomixes can unlock harder worlds, and the existence of a counter in a form of X/Y is a cheap but good trick that will make you go through some levels again and again to appease your gaming OCD.

The levels can be hard, but are never unfair, so every failure is your own mistake. The level design takes great credit for this, as it slowly raises the difficulty as you progress through the game, but physics takes the credit too, as you’ll get used to it quickly, as well as the controls that respond just perfectly.

Of course, some of the more brutal levels will take many attempts before you get used to all patterns and while your muscle memory sets in, and you’ll have a lot of deaths before that happens. 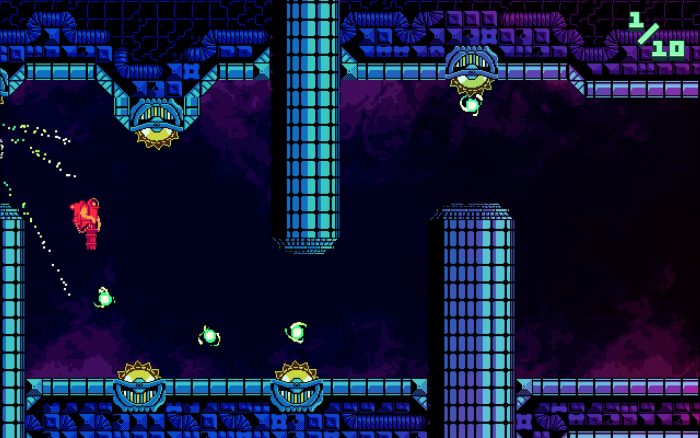 This is where we meet RGJG’s key quality. The game is unforgiving and it doesn’t put up with the player’s nonsense, but it respects the player enough and doesn’t tire him out with its own.

For this ageing author, there’s one criterion that’s rarely ever rated in reviews – the power of the game to put you into a special, nearly hypnotized state. Some of the games that have that quality are VVVVVV, Super Hexagon, Hotline Miami, Devil Daggers, and now RunGunJumpGun too.

All of them have death and failure as a fundamental part of the experience, yet not something that violently stops the game and breaks the hypnotic symbiosis between the player and the game.

RGJG goes so far that it doesn’t even give you a “fail state“ screen, or a message, doesn’t even make you take the effort of pressing a button, but instantly rewinds you to the begging of the obstacle that just slaughtered you. 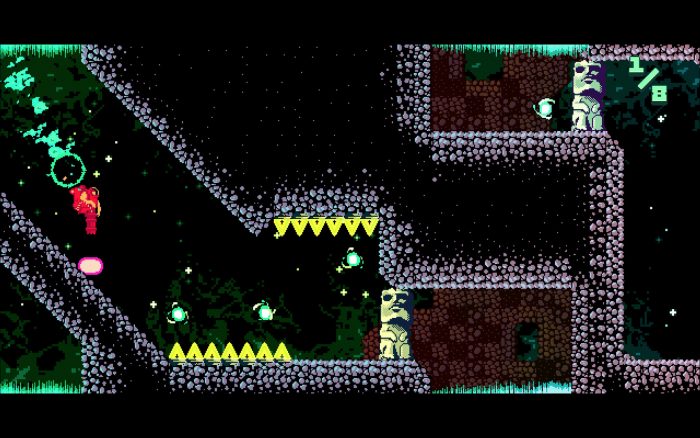 Adding to all that is a visual identity that’s a tribute to the 8bit era, but not in a “corny” way, a lively yet borderline aggressive color palette, and adrenalin pumping background music that’s never distracting. There is also a clear decision of the developer team to insist on the “no nonsense” attitude from the beginning to the end, so you won’t even the menus won’t feel cumbersome.

Lastly, it wouldn’t be fair to say that simplification that brought RGJG where it is means that the game is deprived of any essence, on the contrary.

A carefully woven story can be found between the threads of frantic action that leads our hero through the adventure and fills up the rare times when the player is given a break.

Between levels are very short, funny sequences through which we are lead by various characters, one of which has a very appropriate message: “Why you readin’?!? You should be shootin’!”