If you’re not a fan of co-op survival games this should be the first and last sentence of interest to you in this text about the new game from Fatshark development studio, Warhammer End Times – Vermintide, so you can simply remain in the corner and contemplate your life.

Joking aside, the likable Swedes have treated us with a new game, a mix of Left 4 Dead and Chivalry: Medieval Combat, i.e. you and three friends against hordes of computer- controlled enemies who you’ll get to “beautify” with various tools, such as hammers, axes, swords, arrows and fire spells, as well as a grenade or two. Vermintide takes place in the world of Warhammer, at the time when the armies of Chaos Undivided have swept southwards in an unprecedented campaign against the kingdoms and empires of men, the vampire counts of Sylvania have grown strong once more, and the hordes of rat-like Skaven have poured over the surface world under the guidance of the Council of Thirteen. That’s where you come in, taking on the role of one of the five heroes that have found themselves in the town of Ubersreik, where the game’s story takes place, with the sole purpose to return the rats where they belong – below ground. 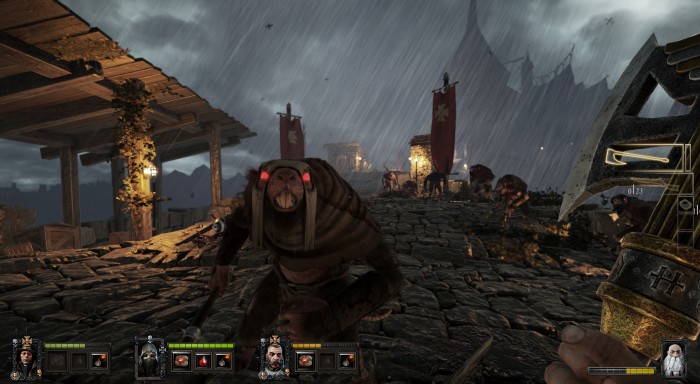 Unlike the game that inspired it, Vermintide possesses a cast of 5 different characters: a Bright Wizard, Witch Hunter, Dwarf Ranger, Waywatcher and Empire Soldier; who differ not only visually, but mechanically as well. Even though each of them is able to battle his opponents from range or in melee, their efficiency at each may greatly differ. For example – the Bright Wizard, Sienna Fuegonasus, is tailor made to destroy enemies in bulk from range using her fire spells, but would struggle against just two “regular” Skaven up close. On the other hand, the Empire Soldier, Markus Kruber, is born to fight face-to-face using a wide variety of weapons that he carries – a warhammer, two-handed sword or a sword/mace and shield combo, while using a gun only when needed.

The combat is fantastically executed and every weapon has two modes of attack – normal and charged. Normal melee swings are quicker and mostly efficient against single opponents, while charged attacks have the potential to kill multiple opponents at once, but could leave you vulnerable while you charge up your warhammer, because every hit you receive will cancel the attack and leave you in an unenviable position, which spells certain death in situations in which you’re surrounded by hordes of enemies – which is modus operandi for Vermintide. Similarly, with ranged weapons spamming left-click while drawing your bow will make you feel like Legolas. Along with two types of attack, the combat includes blocking and evading blows. Each melee weapon possesses a certain durability stat, which in practice represents the number of hits it can block in short succession (for example, two-handed hammer has three, while a combination of mace and shield has five), and the number of blocks it can take replenishes over time. On the other hand, evading blows does not constitute simply running around and hoping that your head does not meet an opponent’s spear, instead it represents a leap to one of three sides –left, right and back – and thus evading a blow, something that you’ll utilize quite often when playing a squishy class, such as the Waywatcher or Wizard. 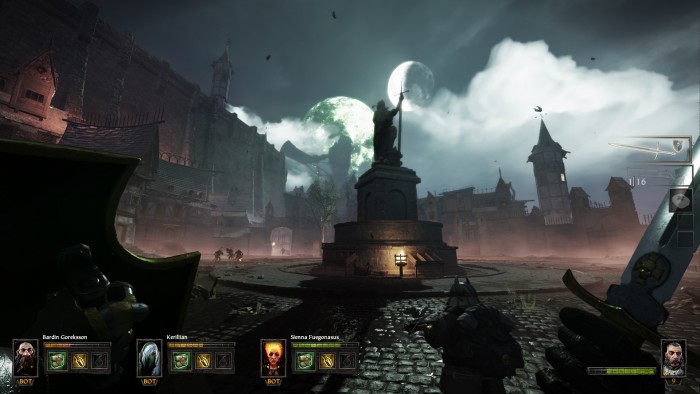 There are currently thirteen well designed maps available, even though they all follow the same principle: you start at point A, do the mission at point B, and evacuate at point C, while being assailed by loads and loads of enemies at all times. The usual enemies that you’ll face most often are the regular Skaven rank-and-file infantry troops that die from a single hit and whose strength lies in their numbers (and irresistible urge to encircle you), but from time to time you’ll chance upon the more dangerous opponents, such as Rattling Gunners – rats with Gatling guns; or Gutter Runners – enormously fast opponents that tend to jump on you from the dark and stab you to death while you lie helplessly on the ground; or some other variety. We don’t want to spoil it for you, hehe. What makes Vermintide difficult yet interesting, even on Normal difficulty setting, is that in 15-20 minutes that it usually takes to finish a map, that whenever you hear the trumpets and the Witch Hunter’s zesty comment of “Get ready! The pack is here.” there is that ominous feeling that it happened at the worst possible moment – and trust us, it will happen often. On higher difficulty settings it’s virtually impossible to finish a level without tactical team play, which is certainly one of the most important elements in a co-op multiplayer game. 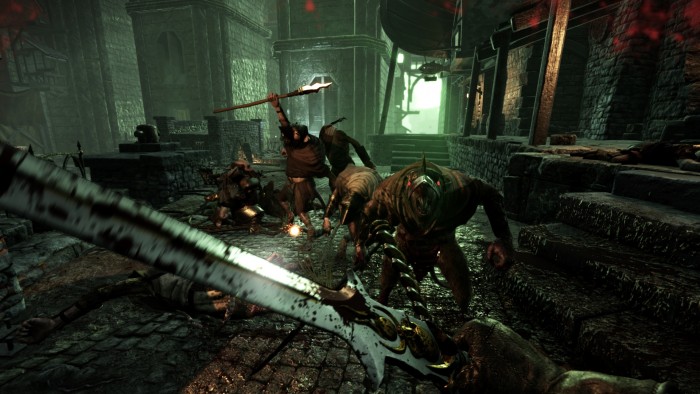 After finishing a mission and closing the statistics screen, you’ll get the opportunity to roll seven dice at once for a new piece of equipment. On the right side is a column that lists the items (showing their type and quality: from normal, white items, to exotic, orange ones; but not their characteristics), and the number of “hits” rolled determines how high you’ll get on that scale and which item you’ll receive. The standard dice have only two “good sides”, but most missions have side objectives that can be done to replace the normal dice with those with better success chance. Since this system guarantees that you’ll end up with loads of unwanted gear, you can “smelt” those on a ratio of five unwanted items of same quality in exchange for one of higher quality, or disenchant them for crystals that can be used to unlock additional abilities on other items. 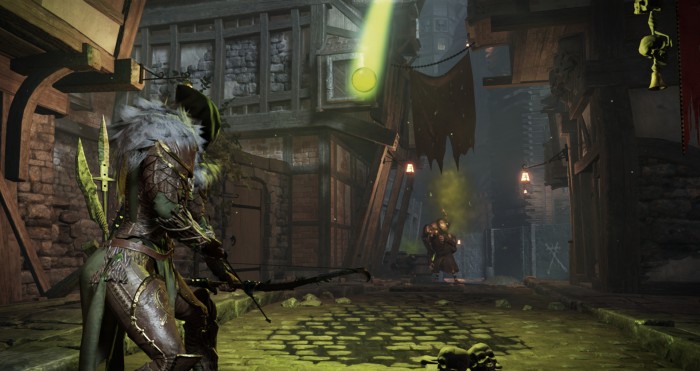 The one criticism we have is aimed at the game’s graphical options. Don’t misunderstand – the graphics are excellent, but the number of options and settings is miserable. That shouldn’t concern you if you have a beastly setup with a new generation graphics card, but for the rest of us, the ability to tweak the settings to reach as many frames as possible is of vital importance. For 99% of the time, the game performs more than solidly on a low-to-medium laptop on medium settings, but certain maps have dragged the author through hell. You don’t get it? Well, you’ll eventually have to climb the wizard’s tower.

All in all, Warhammer End Times – Vermintide is an excellent game that can be enjoyed by the casual players who will spend a couple of hours on easiest difficulty, as well as the hardcore groups that won’t accept nothing less than Cataclysm mode. Fatshark has opened the rat-hunting season!