Paradox, uncrowned masters of their craft when it comes to “Grand strategies”, have presented us with a small surprise with their new game, Stellaris. Although their games are known to mostly appeal to history buffs, this time they went away from their usual historical boundaries and brought us a game with no historical inhibitions, so it falls to the player to create the story for themselves. This concept removes the burden of facts and rules already at its core, paving the way for unrestrained creativity in a genre which is in itself a complete sandbox.

You begin the game by choosing the space nation to start the game with. The game offers several predefined options, but certainly the most fun option is to create your race and nation by yourself. There are many parameters available to you, some esthetic, and some (far more important) mechanic, that will determine your general progression path. So you’ll get to choose your general species (humanoid, reptilian… fungal…), planet suitability (continental, arctic, desert, etc.), racial virtues and flaws, as well as ethical preferences (militarists or pacifists, individualists or collectivists, etc.) which derives your government system choices. You will also choose the general look of your spaceships, what sort of projectiles do they use, and their method of interstellar travel (or FTL for short – Faster Than Light). And that’s all just a small part, so if you love to play around with these sorts of creators in, say RPG games, you’ll probably spend a good chunk of time perfecting every aspect of your race. 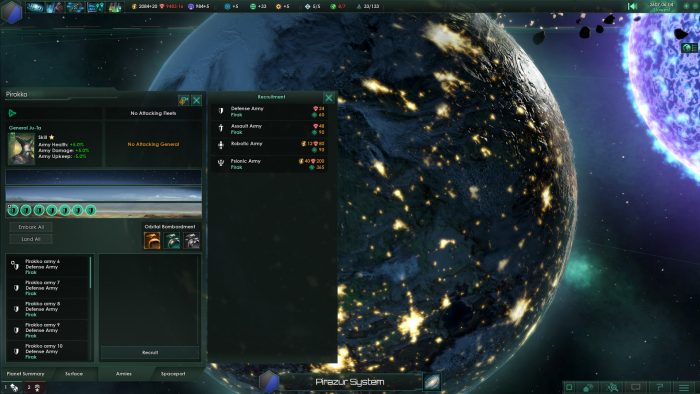 After that, you’ll pick the game parameters – galaxy size, number of opponents, handicaps, and others – and then finally begin your space opera. No matter the size, the galaxies are always divided into star systems which contain different kinds of stars and their orbiting planets, asteroids, gas giants, and all other stellar bodies drifting through space. You begin the game in one such system, with your home planet, its space station, a few civilian ships and a modest fleet of corvettes. If we had to categorize the gameplay of Stellaris, we’d say it’s a Grand strategy with strong 4X influences, and a small, but valuable, dose of RPG. Paradox implemented some of the best elements from their previous games and combined them in Stellaris. So we have governing systems and general layout similar to Europa Universalis, pop-management, nationalities and ideologies from Victoria, certain RPG elements from Crusader Kings, and adaptable creation and customization of armies and units from Hearts of Iron. The main resources you’ll use are Energy, which is an equivalent to gold, Minerals, a key resource used to build everything, then Influence, used for internal governing and diplomacy, and finally three resources for three branches of research – physics, society, and engineering. The control and balance of these resources are key to success in game and it’s extremely fun at the start when they are sparse, forcing you to make concessions in the name of progress, but fortunately the same is true even in late-game, because the demand also grows exponentially, so you’ll never feel like you’re overflowing with any of them – they can easily disappear in a blink of an eye. 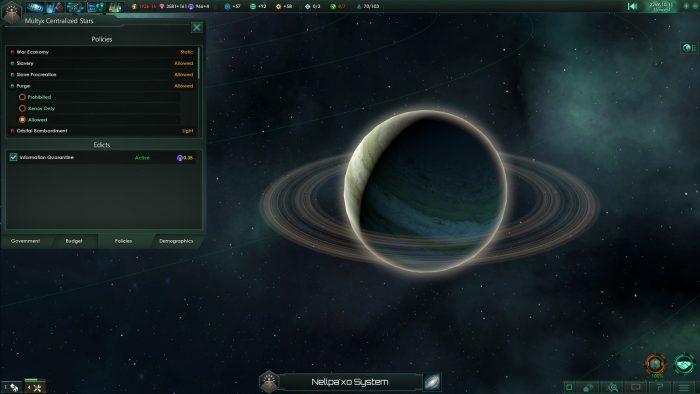 That brings us to one of the main problems with Stellaris, but also with Grand strategies in general – the learning curve is very steep, and the tutorial is modest, to put it mildly. Certainly, Paradox strategy veterans will feel like fish in water after only a few minutes of tinkering with the menus and options, but the fresh blood could be easily deterred by the lack of explanations for many systems in the game. To them, we can only say – persevere, because it’s rewarding to do so! Truly, Stellaris is a very addictive game and we’ve often found it hard to separate from it and tend to other daily matters. “Just this month… here, just until this research finishes… hm, well I’m done with war preparations, I might as well start it… and finish it…  hold on, it’s not fair to leave this anomaly unexplored, who knows if I’ll remember later…” and suddenly it’s 5 am. The “Just one more turn” syndrome in its truest form. Numerous random events add to the element of fun, and they happen regularly, although not so often to become tedious or take the fun away from the rest of the game. So you’ll have your citizens encounter the inhabitants of the planet’s subterranean tunnels, fall under the influence of pheromone pollen that makes them slack off, you’ll be visited by ghosts in space, or find mummified astronauts drifting through the void. These small events further offer narration to your adventure and enrich the gameplay. 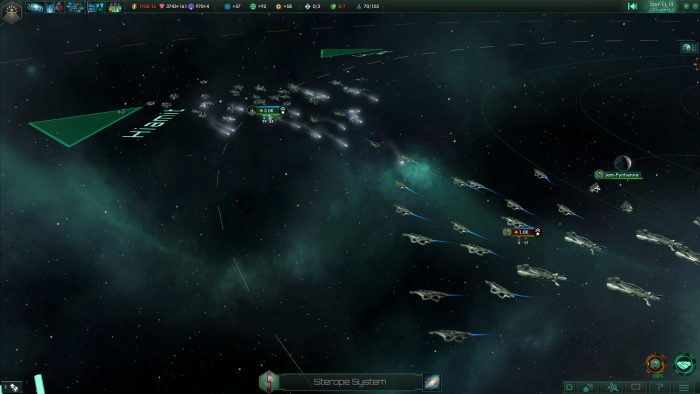 However, there’s more than enough narrative fuel in governing your nation as well. The planets you colonize are divided into tiles on which you can erect buildings used for production or various bonuses, but for them to function they have to be “worked” by a Pop – a system similar to city management from Civ games. However, here a lot depends on each individual Pop’s level of satisfaction. Does he like the planet? How about his neighbor? Does he agree with the Government’s ethics? And what does he think about the robots from the next tile? Some of these points might lead him to join up with like-minded Pops to start a subversive movement which will then attempt to carry out their goals, and it’s up to you to either give in to them, or stifle them through media and bribery. Otherwise, if they grow sufficiently, they can completely choke the industry of whole sectors, and therefore of your empire, at worst possible moment. 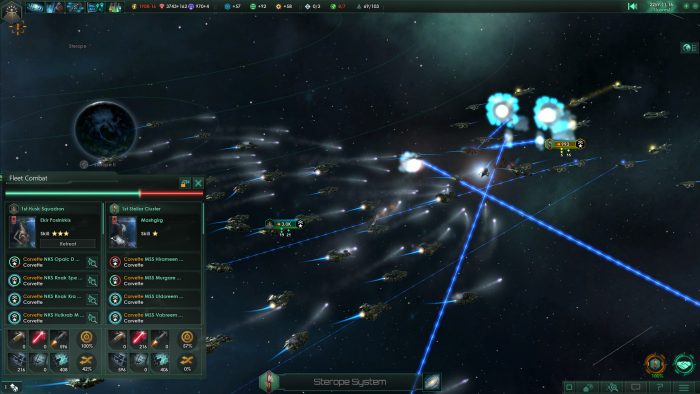 The armies and units are comprised of fleets of spaceships, and assault and defensive ground troops on planets. For the most part, the action takes place in space, and seems like planetary action was only an afterthought by comparison – which isn’t necessarily a bad thing. You’ll organize your fleets with the help of an excellent creation tool – you can create as many variations of a ship type as your imagination, needs, and technology allow. So for instance, a humble corvette can be outfitted for close-range attack, as a long-range torpedo craft, small shield battery, etc. As your technology progresses, you’ll be able to upgrade and retrofit ships according to your needs. Just like in previous paradox games, you have virtually no influence over battles themselves, so all you can do is hope that luck favors you and that your admiral is skillful enough to carry you to victory. Having more ships than your opponent doesn’t hurt either. 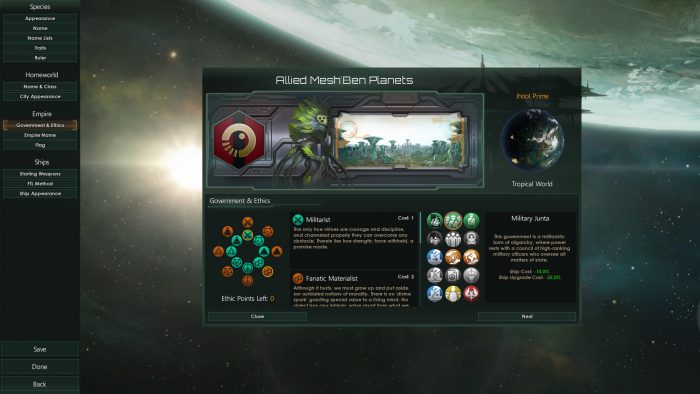 Unfortunately, the AI isn’t too bright and it’s relatively easy to outsmart it and draw it into a trap. That is often the case with the artificial intelligence in vanilla versions of Paradox’ strategies and something that will probably be fixed soon. The case is similar with bugs. They are definitely present and some are frankly bizarre. For example, we had a whole fleet of over a hundred ships stuck in FTL and the only solution was to disband and rebuild them all – a huge deal to happen in mid-game. Similarly, a science ship exploring a planet simply disappeared into thin air, with no event to accompany it, as it usually does on such occurrences. Those and other bugs unfortunately spoil the otherwise awesome experience of playing Stellaris, but taught by previous experiences, we know that the Paradox developers are very diligent when it comes to fixing and polishing their games, so we don’t have a shadow of a doubt that all of it will be fixed fairly soon. 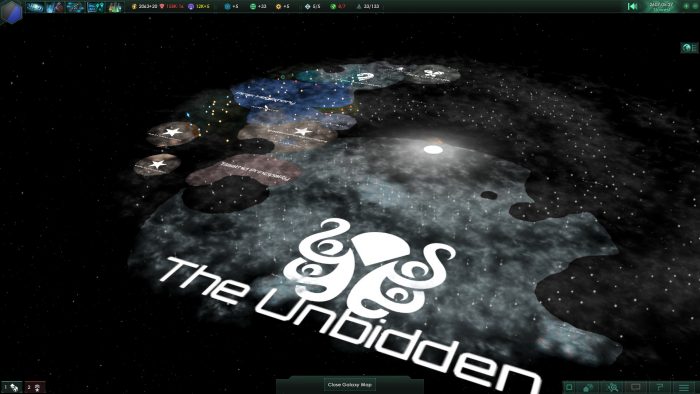 Stellaris is a game with a lot of potential, and that’s obvious when you look at how much some aspects of the game seem left to be enhanced by DLCs. Among them, we could count the internal relations with factions and other races – although there are options present, they seem sparse compared to the possibilities that could be explored. The same could be said of diplomacy – yes, there are a lot of options, but the system seems shallow for a game with this much depth. Unfortunately, that seems to be the current state of the market, where we can almost count on parts of games being left incomplete for later… for an extra charge, of course. 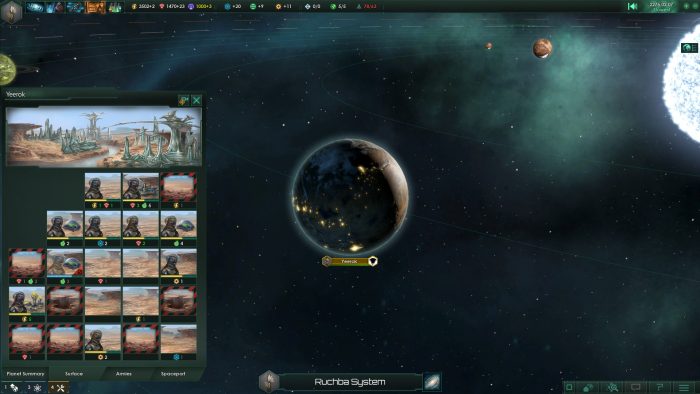 The visual experience is solid and more importantly, functional. The game looks pretty, but nothing to write home about. But those who play these kinds of games don’t play them for their graphics; in fact the most important thing is that everything’s handy. And in that regard, Stellaris does a decent job. The interface is intuitive and easy to navigate once you get to know it, and the graphical cues about what’s going on are informative and precise.  All is as it should be. On the other hand, the background music is excellent. Even when we weren’t playing the game, we’d leave the paused game minimized, just so the music could keep playing in the background. The team perfectly hit that “space opera” vibe when it comes to music, and relaxing electronic tones produce a great atmosphere. However, the accompanying sound effects aren’t on the same level, although they’re far from being bad. It’s simply the case that they’re too loud on their default setting, so if you decrease their volume by a few bits in the options menu, they’ll be at just about right level compared to the music. 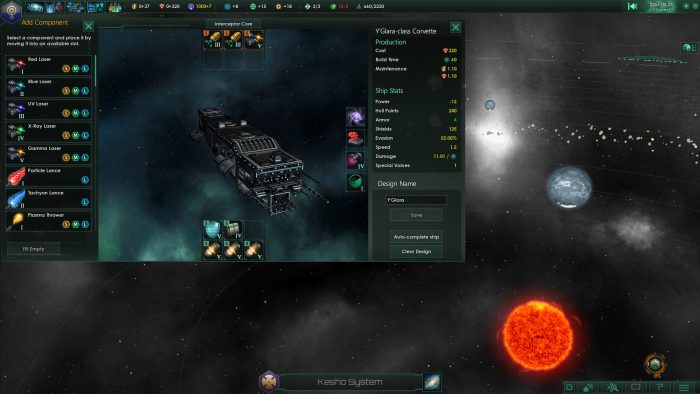 On release, Paradox games are often unpolished diamonds, which over time and numerous iterations finally get to shine to their fullest. Their audience is used to it, and an army of fans is there to help. Stellaris is just one such diamond, but we could comment that it’s pretty polished in comparison to its predecessors. The game is very fun, addictive, but also relaxing. It combines all of the best elements of other Paradox titles, with complete freedom provided by an imaginary setting, so we’re certain that it will only grow to become better and better. Plus, there’s a legion of modders who are wholeheartedly supported by Paradox, and who will make sure that the game will have plenty of options over the years. So, get your space-suit on, put on your helmet, and reach for the stars – the galaxy awaits.