Well this month certainly took us by surprise. We expected a slow month, a few games here and there, but boy oh boy, were we wrong! And we’re glad that we were, because this month featured some big hitters as well as some hidden gems, and you can read all about them on the pages of our magazine.

We didn’t expect Tom Clancy’s The Division to be as divisive to our staff as it turned out to be! And while some of them are still regular visitors to the Dark Zone, others are more reluctant to go back to it. Still, it was a game with high expectations, and as Ubisoft’s first venture into the MMO genre, at the very least it turned many a head around. Another MMO hit the scene, well at least western scene, since it was available in the east for a while now. Black Desert Online is live and poised to take up hours and days of our time with its expansive world, various rich systems it has in place, and last and certainly not least – it’s character creator, which will probably take up most of those hours, if some stories are to be believed. Hitman makes a return, this time in an episodic manner. I wonder if anyone is a fan of episodic releases? Well, fan of them or not, Agent 47 has a new mission and a new level for us to sneak through, with further missions to follow throughout the year. Mortal Kombat is re-released in an XL package, so make sure to check out our review to find out all of its features.

And what about those diamonds in the rough? I’m glad you asked, because this month we were SPOILED for choice with excellent indie or smaller studio games. Superhot is a game that was conceived in about a day as an experiment and now is finally released for everyone to enjoy. Featuring bullet-time action and deep philosophical realizations all in one polygonal experience. Then, for instance, we have Stardew Valley, a game fully conceived and created by a single person. If that wasn’t a feat in itself, the game’s premise is so simple, yet it’s actually so entertaining that you’re almost guaranteed to experience that famous “just one more turn” syndrome. And that’s just naming a couple of them – there are more, many more! Read on and check out all of the games we tried out this month, we’re sure there will be a recommendation for everyone’s taste.

But it’s not all just fun and games (well, sometimes it is). This month, we also managed to have a chat with Daniel Vávra from Warhorse Studios about their upcoming unconventional RPG, Kingdom Come: Deliverance.  It’s described as “Dungeons without Dragons”, and he goes into much more detail about their thought process and vision. We also started a new column, “Around the Tube”, in which we’ll endeavor to bring you interviews with popular and interesting YouTubers from around the web. Our premiere guest was Mrs. Shirley Curry who was kind enough to share her internet experiences with us. We also featured a couple of very diverse pieces of hardware – the extremely precise Razer Mamba Tournament Edition mouse and the wonderful ROG PG348Q, a gorgeous new curved monitor from Asus.

And those are just a few appetizers to get you started, there is much more on the following pages, so make sure to dive in and enjoy the new issue of PLAY! Zine. 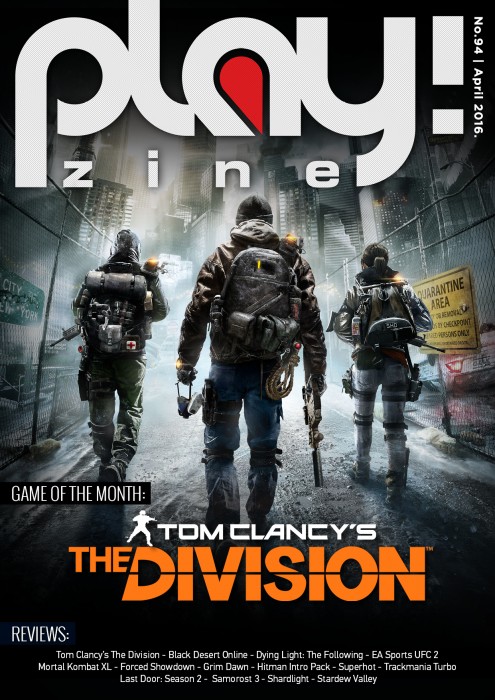