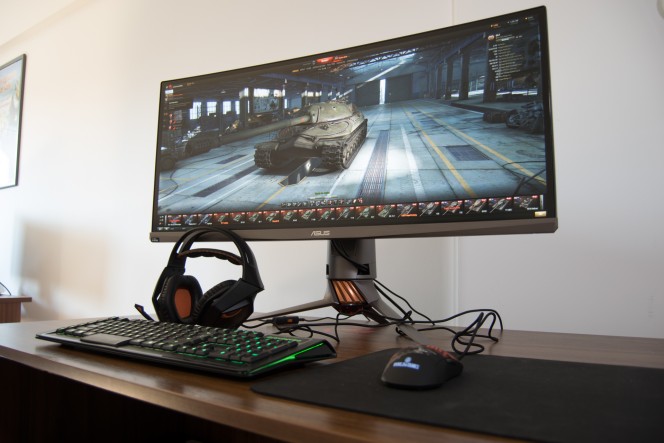 The gaming monitor market seems to be standing still for a while now when it comes to formats. There is an increase in resolution and refresh rates but the 16:9 aspect ratio remains. Asus got us very intrigued when they introduced a gaming monitor with a new aspect ratio – 21:9. Now that we had PG348Q for a test we can say that a gaming revolution might be on the way.

When I was arranging for a pickup of the monitor the guy from Asus office asked me a simple question – how large is the trunk of your car? What kind of a question is that, I am picking up “just” a monitor? Turns out he was on point with the question because the box barely fit into my mid-sized car. But that got me even more interested about what’s inside!

Opening the box, the first thing I found was the bottom of the stand, a tripod of sorts that is extremely massive and stabile. A vertical pipe that goes on it provides side motion, tilt and height adjustment, a marvelous mechanism. In the end there was the screen – a curved 34” display with 21:9 aspect ratio. Looking at it you get the feeling that somebody has put two standard 24” 16:9 monitors next to each other. But then they got bent a little! The best thing is that the screen is attached and released from the stand by just one click while remaining completely stable. I don’t know who designed this system but it’s a masterpiece of engineering. There is also a cable management solution so you won’t make a mess on the table while connecting a Display-port or HDMI, 4 USB 3.0 devices or headphones to it. The power supply is also dislocated from the screen in a form similar to a laptop charger so you can tuck it away somewhere. 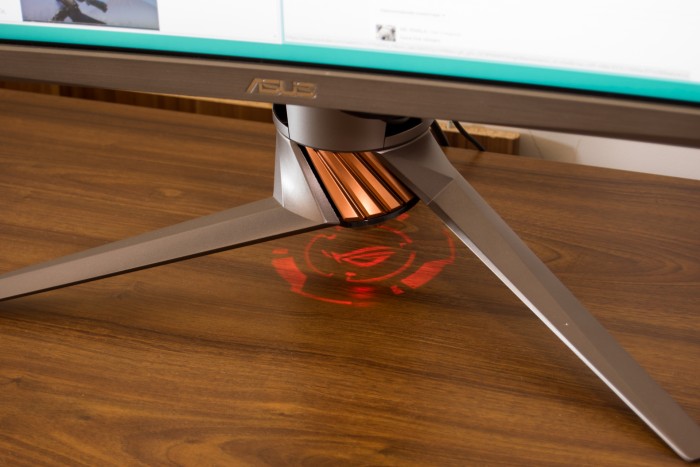 The design is really top notch, although completely oriented towards gamers. It probably wouldn’t fit well into an office environment but then again it’s not meant to do that. I applaud the fact that apart from the bottom there is no bezel along the screen. This means that you can easily put two or more monitors like this in a row, but that would be a really huge viewing surface. When you turn on the device it projects a Republic of Gamers logo on the surface of the desk which gives a really nice impression. However when you turn it on probably the last thing you will be looking at is the logo.

What is it like playing games on an ultra-wide monitor?

When you get in front of this screen you get the feeling that it somehow surrounds you completely which is really nice because you truly get immersed in what’s happening on it. The other thing to note is the huge resolution – at 3440×1440 pixels it’s like having a 2560×1440 monitor (a more or less standard resolution for 27” screens nowadays) and you add about a third more to it on the sides. It takes some time getting used to because you start reading internet forums as if you’re watching a tennis match, but then you realize that you can easily put two browser windows side-by-side and have enough screen real estate for both. Productivity rises almost as if you had two monitors. 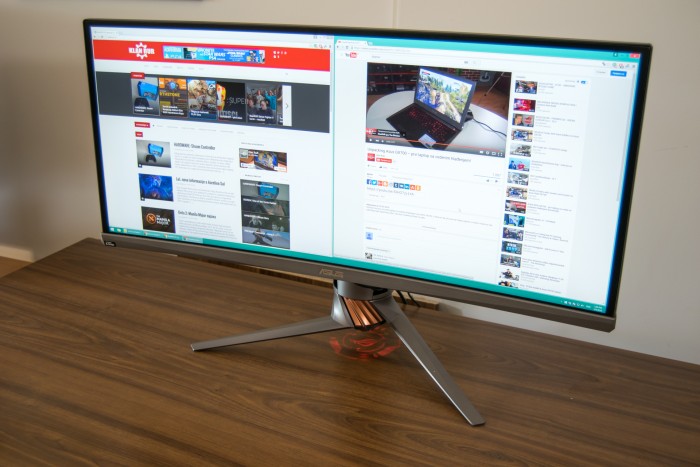 However we were more interested in games – you get more additional space on the sides which can be very noticeable in first and third person shooters – you simply see more. You should also note that not all games support such a resolution so sometimes we got black bars on the side but that should change in the future as the support for ultra-wide screens increases. We had lots of fun when we played multiplayer Rocket League by vertically splitting the screen – it was as if every player got his own separate 4:3 monitor. Also important is to realize how big the resolution actually is – you will need a really powerful computer to run games on it. Our test PC was an i7 processor with a GTX 970 graphics card and less demanding games such as CS:GO or World of Tanks worked just fine. But when we started, for example, Witcher 3 it required lowering a few graphics details in order to run smoothly. Keep in mind that the resolution has 2,5 times more pixels than the standard Full HD. But once you get into the game you forget about the world around you, the experience is surreal.

Adding to the experience are the built-in technologies, foremost being the high refresh rate. It runs at 60Hz as standard, but using a special overclock button the refresh rate goes up to 100Hz. The idea is to run the monitor at standard 60Hz when working or playing some less fast-paced games and switch to a higher setting when playing action games. If anyone is wondering why they didn’t go for a 144Hz refresh rate there is a simple answer: the current Display-port connection standard does not support such a high refresh rate in combination with this resolution. So we will have to wait a bit longer for such a screen. One more important feature is G-Sync technology so you won’t get screen tearing when some of the frames are not synchronized between the graphics card and the monitor refresh. But note that you need a Nvidia graphics card in order for this to work. 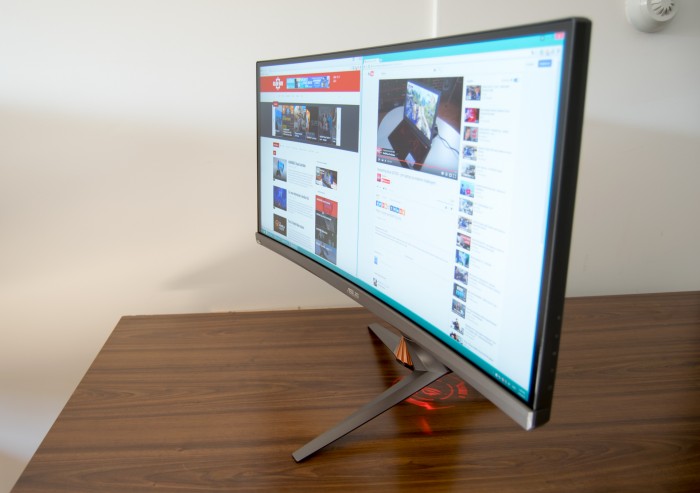 There are also several Asus proprietary built-in technologies that increase the image quality like GameVisual as well as Ultra-low Blue Light that protects your eyes from harmful blue light. All of these options are controlled through an on-screen menu which is navigated via a very small joystick on the back of the screen. 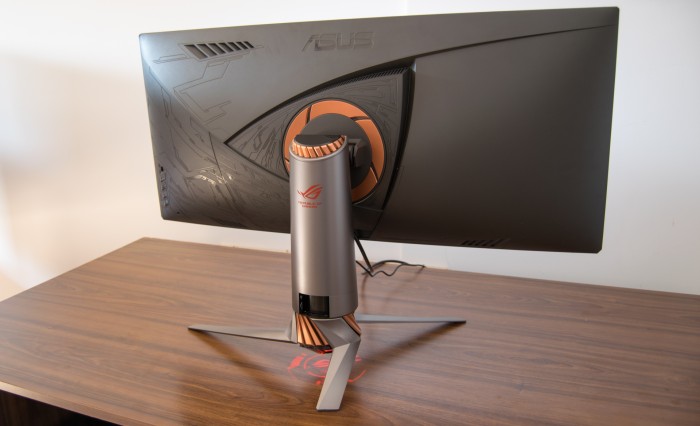 Is it all worth it?

The price of this monitor is roughly 1.300€ which is very high, but you have to consider what you’re getting for your money. This is truly an exceptional monitor, I would dare to say among the best I have ever seen. It’s mainly intended for gaming but can also be used for other, even professional, purposes. We can only regret that as conceived at the moment it will probably remain out of reach for most of us gamers but we can hope that the technology will become cheaper and that more will be able to benefit from it. And while some of my colleagues threatened to chain themselves to the screen, others helped me put it back into its huge box, and an occasional weep or a sob could be heard during PG348Q’s departure… 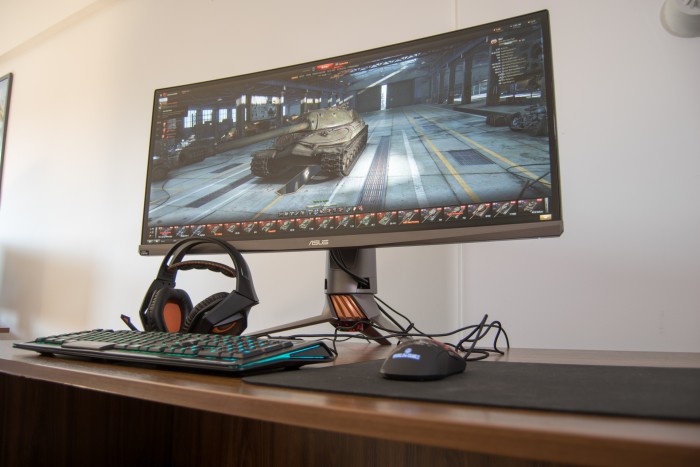