Exactly one year ago, in February 2015 this promising rogue-like RPG appeared on Steam Early Access as another offspring from the small developer’s Mecca of Kickstarter. Back then you could read the first impressions of Darkest Dungeon on the pages of our magazine, and now we get to see what a year of stewing in the Early Access phase has brought to this game.

Darkest Dungeon is a game “sold” to the audience as an old-school, hardcore, rogue-like, skill-intensive, Lovecraftian, blah blah blah…..you got the point. So, the target audience for this game is a specific group of people, older (and some younger) gamers who consider themselves hardcore and are looking for a challenge to test their limits. Darkest Dungeon was indeed very promising; we have all drooled over the first trailers for the game, that dark, mystic atmosphere and seemingly complex mechanics. The game was preceded by a huge hype in the gaming world; everyone played it, praised it, but also showed a degree of concern. It’s been a year, enough time to make the necessary changes and improvements, so in our opinion, the time has come for someone to finally break through the hype, take a good look around, fire a gun into the air to get the needed attention and shout out “People, the king is naked!” 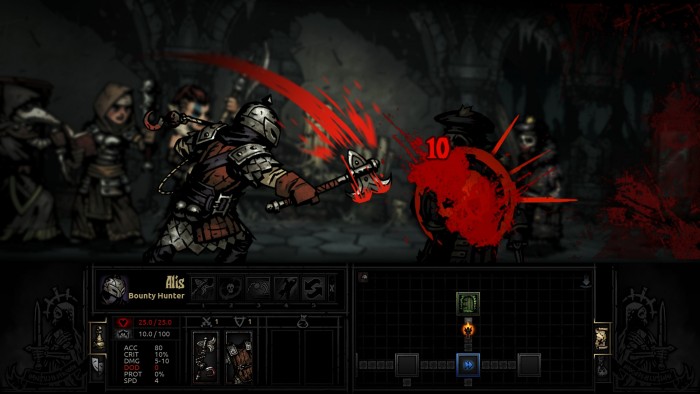 But, let’s focus on the good thing first. The game has a truly amazing visual style and a fantastic, dark, comic book-like graphics, all of which gives it a very specific atmosphere. In accordance with the comic book style, the animations are also very simple, short and crisp, and that perfectly fits the atmosphere the game wanted to create. All characters in the game, your fighters, as well as your enemies, are done carefully and with a lot of care, and they represent another eye candy we can enjoy. The color scheme is dark and saturated, and overall the graphic style mostly resembles modern cut-scenes which are popular these days and can be seen in the latest Witcher for example. The crown of this whole amazing atmosphere is the epic voice of the game’s main narrator (Wayne June) which, combined with the gloomy and unassertive background music, makes for one well rounded experience.

The story of the game, if we can even call it that, is fairly basic and it’s only purpose is to provide the player with a basic premise and a semblance of a plot. You take on a role of an heir of an estate whose previous occult-obsessed owner managed to release all sorts of evils and then committed suicide. You travel to said estate and with the help of mercenaries try to rid it of those unholy powers and reclaim your inherited property. It’s a shame that a game with such a rich ambient didn’t have more narrative elements. But, people don’t play rogue-like games for their narrative anyway; instead they do it for their gameplay mechanics. Except that’s exactly where this game failed to provide. 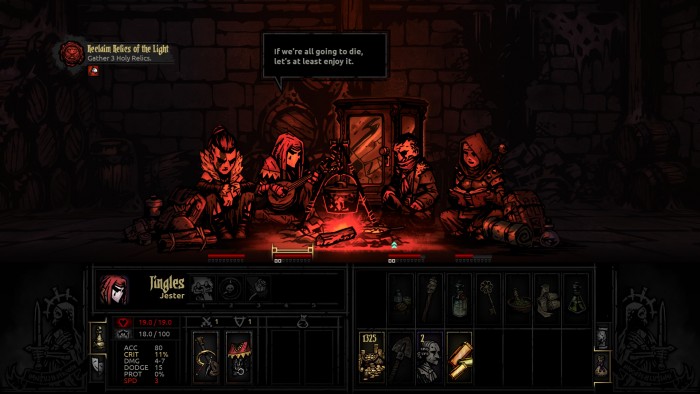 On paper, Darkest Dungeon indeed brings many innovations and revolutionary mechanics. Your goal is to enlist mercenaries to help you clear out four dungeons of their “unwanted tenants”, and then to finally get to the fifth dungeon which bears the game’s titular name – Darkest Dungeon, which is the endgame content that shipped with the game’s official release. You must pay and maintain your mercenaries, so therefore the first segment of the game is basically a micro-economy game in which you’ll have to develop the estate, or more precisely the village in it, and where you can develop various buildings, such as a blacksmith, tavern, church etc… All of these play an important role to your heroes and can be useful depending on the needs of your team. The game boasts 14 different classes of adventurers, some of which are standard classes that we see in everything, while some are really original. As in every rogue-like title, perma-death is featured here as well. For this reason, in your village there’s a recruitment center of sorts, where new adventurers thirsty for challenges and rewards can be found all the time. You may hire as many as you like, but only four can be sent to action at a time, so it’s of the utmost importance that you have the right composition once you venture off  to an adventure.

Your heroes will die – make sure to remember that. No matter how ideal you think your team is, don’t be fooled, because sooner or later you’ll lose some of it’s members. Something unpredictable will happen and you will be left without your most reliable characters. Even if the most experienced heroes do manage to survive, during the game they will accumulate ‘stress’ which will make them less and less reliable as the time goes on, by getting various negative traits – becoming selfish, paranoid, masochistic, or something else; and then you’ll have to send them on a vacation for a while, to a church to pray, or to drink and gamble in the tavern. Those heroes are of no use to you while they’re in recovery, so you’ll have to use others. Levelling new heroes from scratch can be very tedious, so it’s really important to take good care of your best mercenaries. 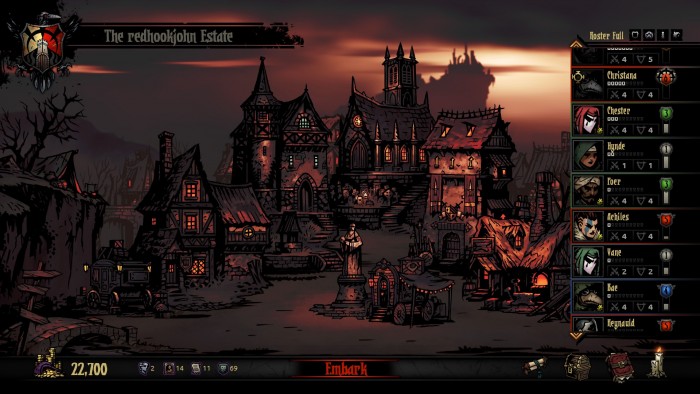 We mentioned ‘stress’. This is a game mechanic which also represents one of it’s “selling points” that the developers used to market the game. The basic idea behind this mechanic is for us to view these adventurers from a more humane angle – as people made of flesh and bones who can be influenced by the many horrors they face over time. There are many factors that influence your stress scale: dwelling in the dark for too long, too much damage taken, lack of food… Darkness can be easily regulated by carrying torches, but the more illuminated you are, the higher is the chance that you’ll get spotted by some unplanned (additional) enemies, so you’ll have to find a balance. Food adds to the survival aspect of the game and you have to carry it with you to every mission, but the more food you take, there’s less space that remains for loot and other equipment. Once a character accumulates a critical mass of stress, one of his negative traits becomes active. In case one of your characters suffers from too many of these negative traits at once, it might not be cost-effective to treat him anymore, and it might be better to simply let him go. The missions themselves, i.e. quests, are simply exploring and clearing out randomly generated dungeons. You walk down a hallway from room to room and disarm traps or battle opponents. Battles are always 4 on 4, in which both your team and the enemies are lined up, and the position in line can significantly determine what can a certain character do and which abilities they can use, making it a key factor when choosing your tactic. To solve any quest, aka go to the dungeon, you have to clear all of it and have 90% of it explored. If you think that you’re in trouble, you have the option to abandon the quest – but you will also lose all of your loot. Resources can be used to recover your mercenaries, develop your estate, upgrade armour and weapons, hire new mercenaries…. But the resources are scarce and very important, so you will often barely make ends meet. 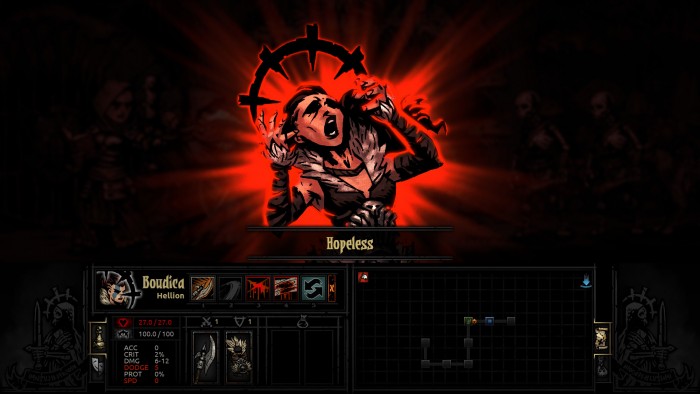 All of this makes it seem like the gameplay is rich and diverse, so you’re probably wondering why we rated this game so (relatively) low? Simply put – because we got a cat in the bag. The game might amaze you for first ten-or-so hours. Overwhelmed by the different options and gameplay elements, you might feel that the game is heaven for the fans of tactical turn-based rogue-like RPGs, but that simply isn’t the case. The starting amazement with the game slowly turns into monotonous grinding and stress accumulation. Being a hard game is not about having all of your effort goes to waste due to some random factor which you simply can’t influence. A few unfortunate mishaps causing you to lose a few key characters is all it takes to set you back to have to tediously grind for new resources and level new characters. Apart from that, the game lacks content diversity, which is why it can quickly become boring. The enemies soon start to repeat and the “advanced” dungeons are simply upgraded versions of those same enemies you fought on lower levels. The dungeons at first look nice and detailed, but then you realize that you’ve seen the same corridor a thousand times and wonder how is it possible that no one thought of adding a few more designs. We understand that rogue-like dungeon crawlers usually eschew strong narratives, but when every quest is “go open all the doors and kill everything”, at some point it stops making sense. Furthermore, the game is brimming with balance issues that would warrant another text that’s just as long. Suffice to say that there’s a ton of unimportant and redundant characters and abilities, when damage is more or less the most important one.

If you can get over all of this and are not bothered by the huge amount of random elements which you can’t influence, then we believe that you can enjoy some twenty hours of good fun with this game, and we would recommend it on those terms. However, if you’re a fan of a true challenge, sadly, all you will find here is a nerve-grinding machine. There’s a speck of light though, because the developers have also provided us with modding tools, so there’s a hope that someone might be able to harness all potential of this title, which is currently akin to some of our football starlets who’ve went abroad at the age of 17 and were never heard of again.