Activision is one of those publishers that has churned out an impressive amount of licensed games over the years. From the excellent earlier titles such as Spider-Man, X-Men Legends and Ultimate Alliance, to abysmal entries like the more recent The Walking Dead: Survival Instinct, Amazing Spider-Man, etc.

There’s a fair number of Transformers games among those, including a few hits and a few misses. Some of the older TF games had their moments, and probably the best of those were with the release of War for Cybertron and Fall of Cybertron. However, over the years there were also the awful releases that were produced as shovelware to go along with Michael Bay’s movie abortions. Unfortunately, it all culminated last year when someone from Activision decided to cut the budget, remove High Moon Studio from the Cybertron games and merge them with current TF: Michael Bay games, resulting in Rise of the Dark Spark. Although canon to both the Cybertron and Michael Bay games because of them merging in this game, that game was a complete bomb. It disappointed both because it had recycled content from the previous Cybertron titles, but also because of it’s overall low quality – it’s retarded story, graphics and optimization. 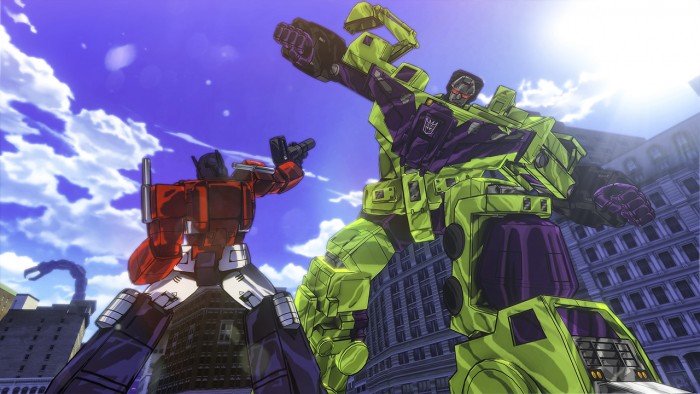 Why is it important to mention all of this when this is a Transformers: Devastation review? It’s important to illustrate everything that has led up to this game, all of the previous highs and lows. Yes, the Cybertron games were great, but that still wasn’t “it”. Although PS2 and the older consoles had a few solid games, the Transformers never got the game worthy of Generation 1, i.e. that cartoon that we all remember and love. Someone, somewhere, has somehow decided to change all of that, and got Platinum Games (Vanquish, Bayonetta, Revengeance) to create it and Activision to publish it.

Basically – this is the game that we’ve been waiting for, that one game that would have blown everyone’s minds had it existed back when G1 was current. Of course, back then that was impossible, so we just had to be patient. As you might have heard from the announcements, the game uses cellshaded graphics in the style of Generation 1 and the original Transformers. And it looks good. And it looks believable. And most of cellshaded games, by some unwritten rule, don’t require you to have a beastly machine to run them, because they tend to rely on their visual style instead of demanding graphics. We haven’t noticed a single graphics bug during gameplay, everything’s as it should be, so there’s no fault there. Ok, there’s a slight fault, although it’s not necessarily a graphics problem as much as it’s a level design issue. It’s an issue that’s endemic to many of these quick hack’n’slash titles, such as Revengeance – the issue of many of their battle zones looking kind of empty. In this case, that can be best observed while in the city, where you’re surrounded by generic buildings, there’s no people, a few cars with 2-3 different skins, a tree or a shrubbery, and that’s it. Fortunately, the gameplay is very active with many things to collect, so the background monotony doesn’t affect the overall experience. 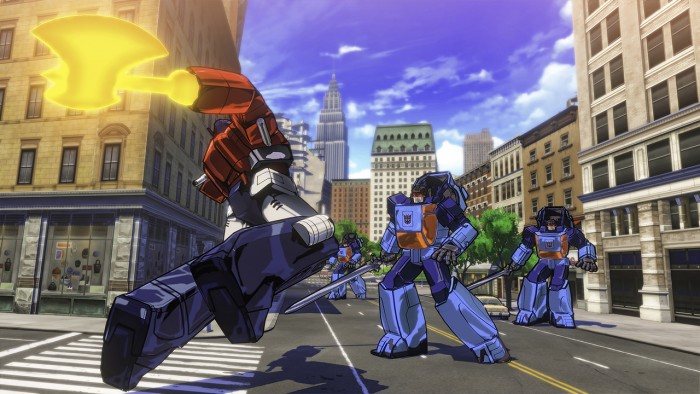 We have to briefly mention that the sound effects and music are completely authentic. Most of the voice acting was done by the original actors, primarily Peter Cullen as Optimus Prime and Frank Welker as Megatron. The only objection would be that instead of those cool tunes that were so good in the original series, the music has somewhat slipped into some random metal, as is usual for most Platinum games. Still, it’s a plus that the music was composed by Vince DiCola, who also worked on the music for Transformers: The Movie from 1986. And also bearing in mind that this is a predominately fast-paced action game that doesn’t let up, maybe this choice of music isn’t such a bad thing. 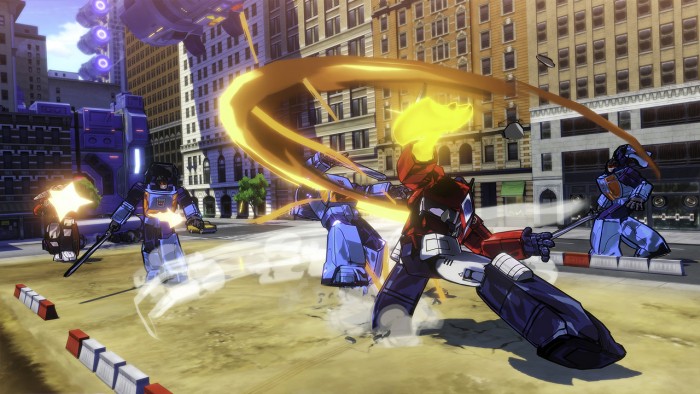 If you’ve ever played a Platinum game, then you’ll know what to expect – speed, metal, craziness, combos and a rating at the end of each fight. The fights are composed of several elements: hand-to-hand combat, all around gunfighting, and driving. Hand-to-hand, i.e. melee combat is perhaps the prevalent type, although all three of them intermix during the fights. However, perhaps the most interesting one is the third type – driving, in which you transform into a vehicle and run over or crash into your opponent. All of that can be comboed to your satisfaction with shooting, melee hits, and special moves. There’s a huge choice of weapons, as well as a range of modifiers to improve the stats of your character. 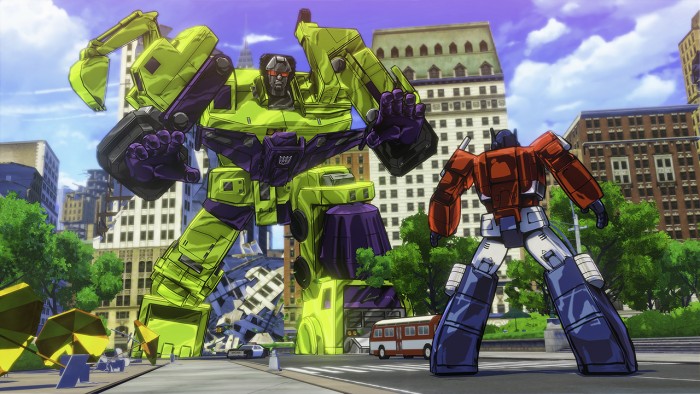 Right alongside weapons, it bears mentioning that during the game you can play as five different characters (Optimus Prime, Bumblebee, Wheeljack, Grimlock and Sideswipe), who you can advance with XP points, which are also used to upgrade your weapons, craft modifiers, or buy new moves. We would advize you to chose one or two characters as your mains and work towards maxing them out, because unless you manage to collect absolutely every bit of XP and finish every fight with SS rank, you won’t be able to level them all even close to max. Unfortunately, unlike the Cybertron games, here you won’t be able to play as the Decepticons, which isn’t necessarily a minus, but is worth mentioning.

The controls are solid and there’s not much to be said about them If you’re a masochist you’ll play on a keyboard, while for the best experience we recommend that you play on a joypad. 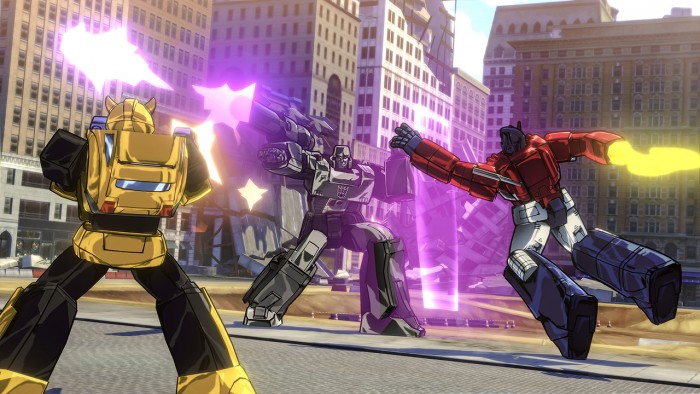 Transformers: Devastation is a sold, well-rounded game without any major issues, and as such it certainly deserves a 7. And when you add to it that it finally fulfills the wishes of the fan base and that it’s a very well put together game brimming with respect and love for the original series, then that 7 turns into an 8 for all the effort, care and perseverance. As just another action game, it’s a passable 7, but as a game for TF G1 fans, well… for us it’s an 8.