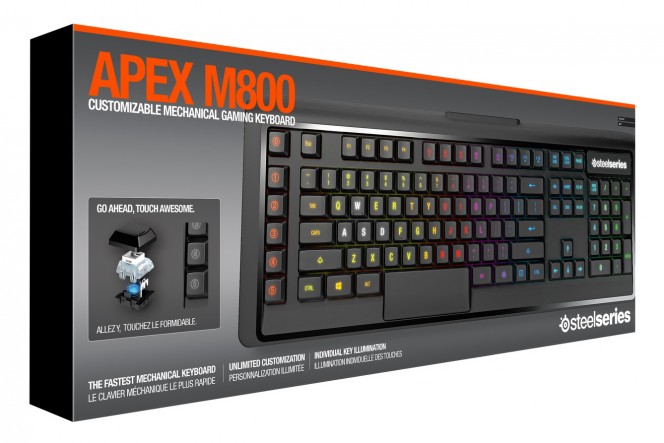 Each time we get a new product from Steel Series we expect something extraordinary, so they immediately got our attention when they announced that Apex M800 is the fastest mechanical keyboard on the market. And that’s along with many other useful top-tier options on offer from them.

When we first tried out the SS Apex membrane keyboard we were amused by how overtly short its keys were. Apex M800 follows in its footsteps with its own shallow keys, something almost unheard of in mechanical keyboards, and something I personally liked. While being mechanical, these keys have actuation point akin to a membrane keyboard. This directly relates to clicking speed and means that you can click longer and faster without tiring, which is a plus in those marathon gaming sessions. 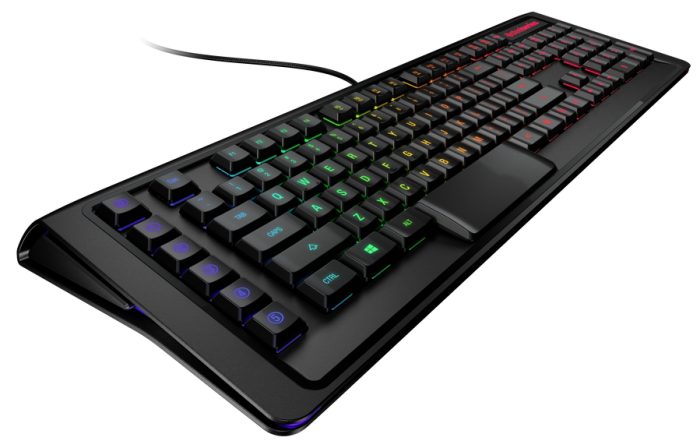 Besides it’s keys being faster, it also features the N-key anti-ghosting function that’s enabled with a special processor built inside the keyboard, and the manufacturer claims that it supports up to 256 simultaneous clicks. Of course, we were unable to click all the keys simultaneously, and on the other hand, the keyboard itself has less than 256 keys anyway, meaning we’ll have to take their word on it, but the fact remains that we haven’t noticed any ghosting while working on it. As usual, there is also the standard option for recording macros which can be activated with special keys.

Another thing we immediately noticed was that the keyboard isn’t too heavy, but there’s no chance that it will accidentally slide on the surface thanks to its excellent rubber feet on the bottom of the device. If you prefer raised feet you can switch two of them with another set of bigger ones that are provided and you won’t have to worry about breaking any flimsy plastic feet like you would with most other keyboards. The keyboard features 6 additional keys on the left side, as well as a special Steel Series key for extra functions. And we highly praise them for providing a much bigger spacebar which is much easier to press than the standard one. Two 2.0 USB ports can be found on the back side of the device, so you can connect a few peripherals there is you want to. 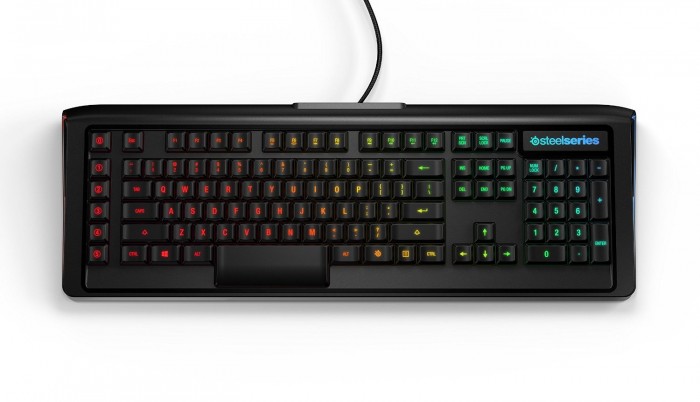 Most of today’s gaming keyboards come with backlit keys, and most of those support changing of brightness and hue, but none of that can prepare you for what happens when you connect the Apex M800 to your PC. By default, the keys light up and the colors flow from yellow to red and from side to side of the keyboard, but that can all be changed with SteelSeries Engine software, even down to the individual keys. It comes as even greater surprise that the keys can change color as you type, flowing from red to blue that slowly turns white and back to red once more in a matter of seconds. This creates an interesting visual experience that enables you for a moment to follow the exact order that you typed in, but you can also choose to turn this feature off if you find it a bit too much. After a few minutes of inactivity, the keyboard goes into some kind of stand-by mode in which it slowly cycles the whole color spectrum.

But to keep the colorful keys from being just a pretty face, we can thank the GameSense software, which is an add-on to the already well known SteelSeries Engine. This software enables the individual keys or groups of them to light up in different color in response to what’s going on in-game. Currently, only a few titles are supported by this feature, like CS:GO or DotA, but let’s say that your health or ammo falls down to a certain level in Counter Strike – you can set up a specific key or a group to change to a specific color when that happens. The situation is even better for MOBA games, as you can set up a “cooldown” for specific keys, which includes the color, brightness, duration, etc. Of course, it’s questionable why would you want to track something like that on a keyboard instead of the screen, but if the keyboard falls into your peripheral vision, this might be both a fun and useful option. 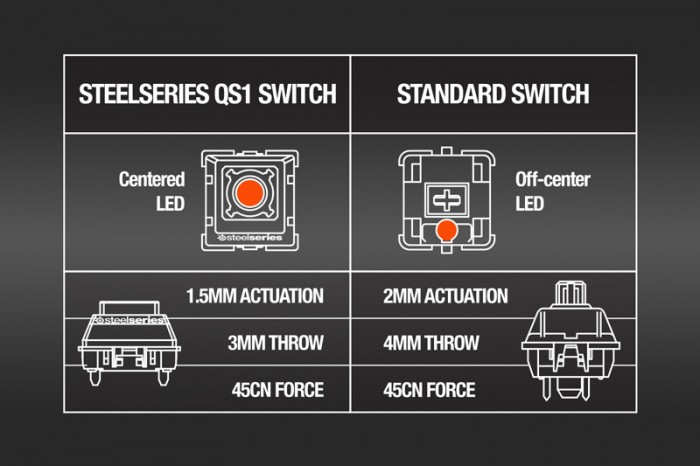 Apex M800 is without question one of the best gaming keyboards that we have ever tried, and I personally prefer the shorter keys, because I’ve never truly gotten used to the taller keys and deeper actuation points featured on most of the other mechanical keyboards. On the other hand, I wasn’t too impressed by the interactive lighting as it seems like it’s more for show, then a truly useful feature. However, this is without a doubt a top-tier keyboard that also comes with an ample price-tag, so expect to have a much thinner wallet if you decide to treat yourself with one.